The 31st report is online. It's not really weekly one, yet it’s not a monthly report either. We plan to issue regular reports by the end of the registration for the Alpha test. We want to solve the most urgent problems by then.

As many of you know, the Alpha-version was practically already shown to several members of the ROG club at the beginning of May. They helped us prepare for the showcase of the project.

After successful presentations, we set course at fixing critical bugs and we spent the majority of time for capacity-building of the combat system’s emotionality and the graphics: the active replacement of placeholders and refinement of the content.

Today we are just going to talk about it. Also, the most important thing, we invite the ROG club to the pre-Alpha test.

We also introduce the information labeled “In the works” in this report. This means it involves the new content. The content production has been split into stages. We’ve made the first and the most important stages to introduce them faster in the current build. The remaining stages are of lower priority and they’ll be added gradually along with the completion of higher priority tasks.

The main issue with the animation of the two-handed powder is not just with loosening things up and adding elasticity to hands, but it’s in the merging of the elasticity with the movements.

This is how this animation looks at a standstill:

This is already the 3rd version since the mechanics have been significantly modified. The reason for the changes is that it's impossible to use mocap animations within the framework of having just a single jump type.

More details about the mechanics of the new jump are in the previous report.

Earlier, we intended only one jump and it looked like this:

Now there will be 3 types of jump:

1) The quick jump in motion:

The complete mocap with a pleasant blending of animations., i.e. the transition from the running animation into the jumping one and back.

2) Fast jump at a standstill:

In the works: We are planning to smoothen the blending so that the slight squatting motion does not sneak in just before the jump and at the end of it. At the moment, they are cut off by the engine, because there’s a need to instantly move the character up and put him in idle stance after pressing SPACE.

3) The jump in combat stances will remain as version 2.0. This is how it looks like:

By analogy with the jump, we’ll add a reasonable smoothing when blending.

We created items with the initial intention to use cloth physics. Based on that, we modify the poly-count and the whole approach to the structure of folds/cuts and etc. This is why we want so much to sort things out with cloth physics.

The main problem is the incorrect behavior of folds especially during sharp turns of the camera and so on.

Work has been carried out including the optimization and here is the result.

In the works: a unique cloth physics for different material thickness.

III The emotionality of the combat system

We want to put emphasis on the combat system from the 1st person view. Despite certain frames forced by the genre, we began to work on the camera behavior and various effects during the combat.

Each strike will be accompanied by 9-10 sound and video effects.

In the current build, we’ve added two new effects: the motion of the camera during strikes depending on the animation and the refraction effect following the blade.

And here everything is in slow-mo:

A similar effect will be added to the bolt when shooting with a crossbow:

The effects will be especially useful after the update of the combat system to version 2.5.

In the works: heavier and more weighty strikes with a two-handed weapon, especially chopping and crushing weapon, as well as with the giant swords; the magical effects on the blade, the effects of damage on enemies’ bodies, and, perhaps, cutting off limbs as a specific fatality.

IV New models of weapon and a gift

We've added 13 models of melee weapon in the game without taking into account different materials. 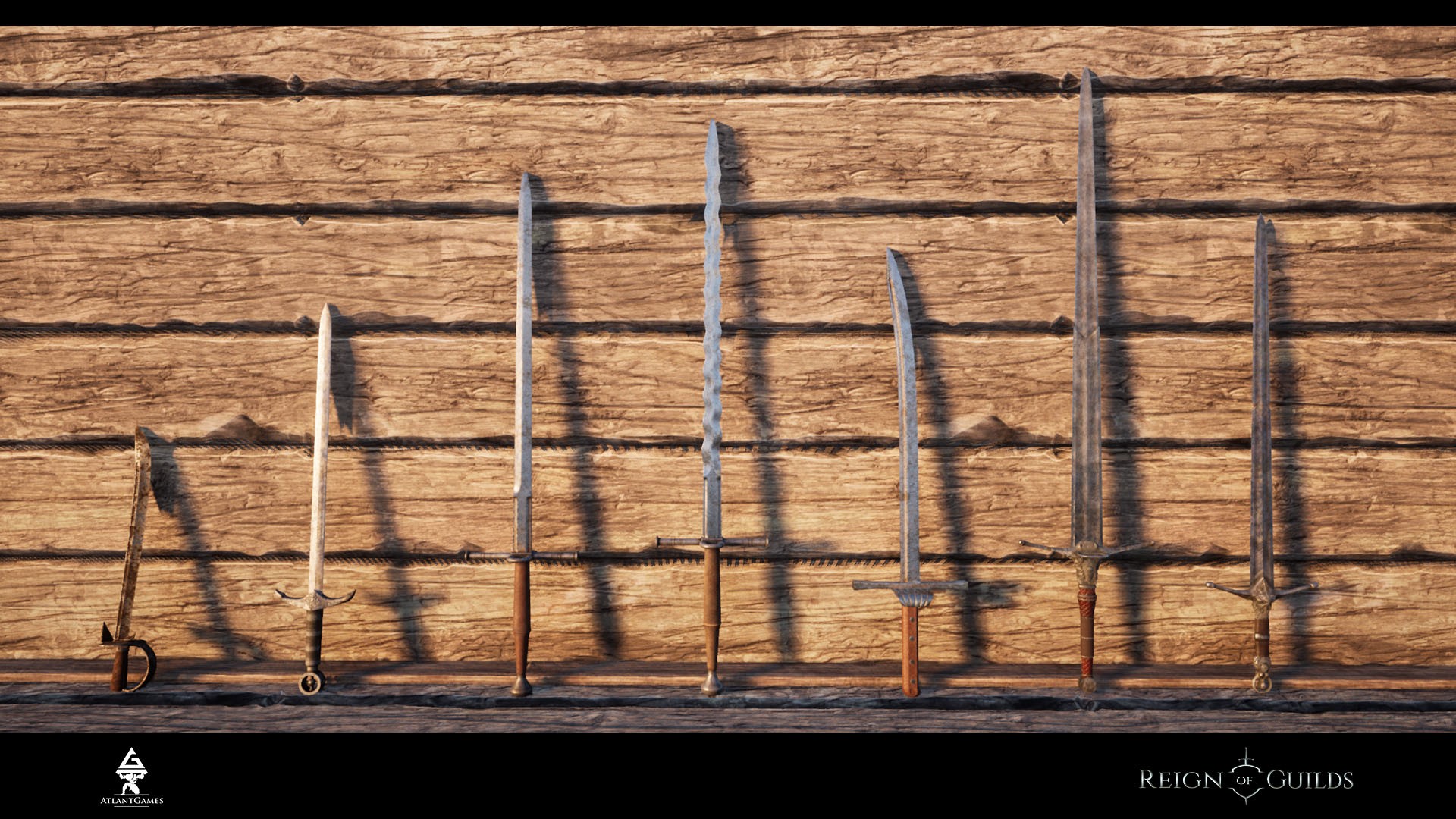 We’ve prepared a small compensation as a unique skin of the sword of Atlantis, which can be applied for Zweihänder for those who have already placed the pre-order or those who are planning to pre-order before first discounts, which we’ve mentioned in a recent email.

V The animation for the combat v2.1

At last, the most beautiful and dynamic thing from all we've done recently.

The task was rather non-trivial: we wanted to add dynamic strikes to the combat system while introducing it comfortably to the control scheme without overloading it.

Welcome to the attack of Achilles, which is well-known to many of you:

It will be done only with a one-handed weapon after sprinting with the empty left hand, i.e. with the combination of buttons W+SPACE+RMB (Right Mouse Button).

But it’s not so simple:

In the works: guards with a shield will get a similar attack in terms of control. It will be a push with the shield (regular) updated to version 2.0. And the two-handed weapon will get chopping strike from above after the jump.

In conclusion, as usual, a little bit about future plans apart from those that we’ve already told you in the last email:

In the next report, we’ll tell you about bugs and errors that we've fixed during last month, and about the new content and new approaches, which became available after we solved several technical problems.

Also, as a reminder, we resume the registration for the pre-Alpha as well as re-open the ROG Club registration. You may find more details by following the link.

Friends, yet another reason to ROGgoms up!!

Yours sincerely,
The team of Reign of Guilds