Past friday is on the air and it presents another 14th weekly report. Now let’s get to the point.

But we should warn that there will be a lot of letters. We will try to tell a little about ways to control a castle/county/kingdom.

I Animations of NPC - 1H Weapon

There will be 4 types of attacks and all with root motions. From one hand it will make them alive but from the other hand it’ll make them more unwieldy.

The guard’s death will work through the animations instead of ragdoll physic as we used it on the characters. There are many reasons for it.

Their deaths look dynamic enough but it denied the fun that one can meet at the ROG characters’ deaths, as strange as that sounds.

We continue to work on the castle. Let’s be honest, it’s our first castle where we practice in the field of:

We will surely tell in detail about donjon and its mechanism but later in the next reports. And now only pretty pictures of our artists! 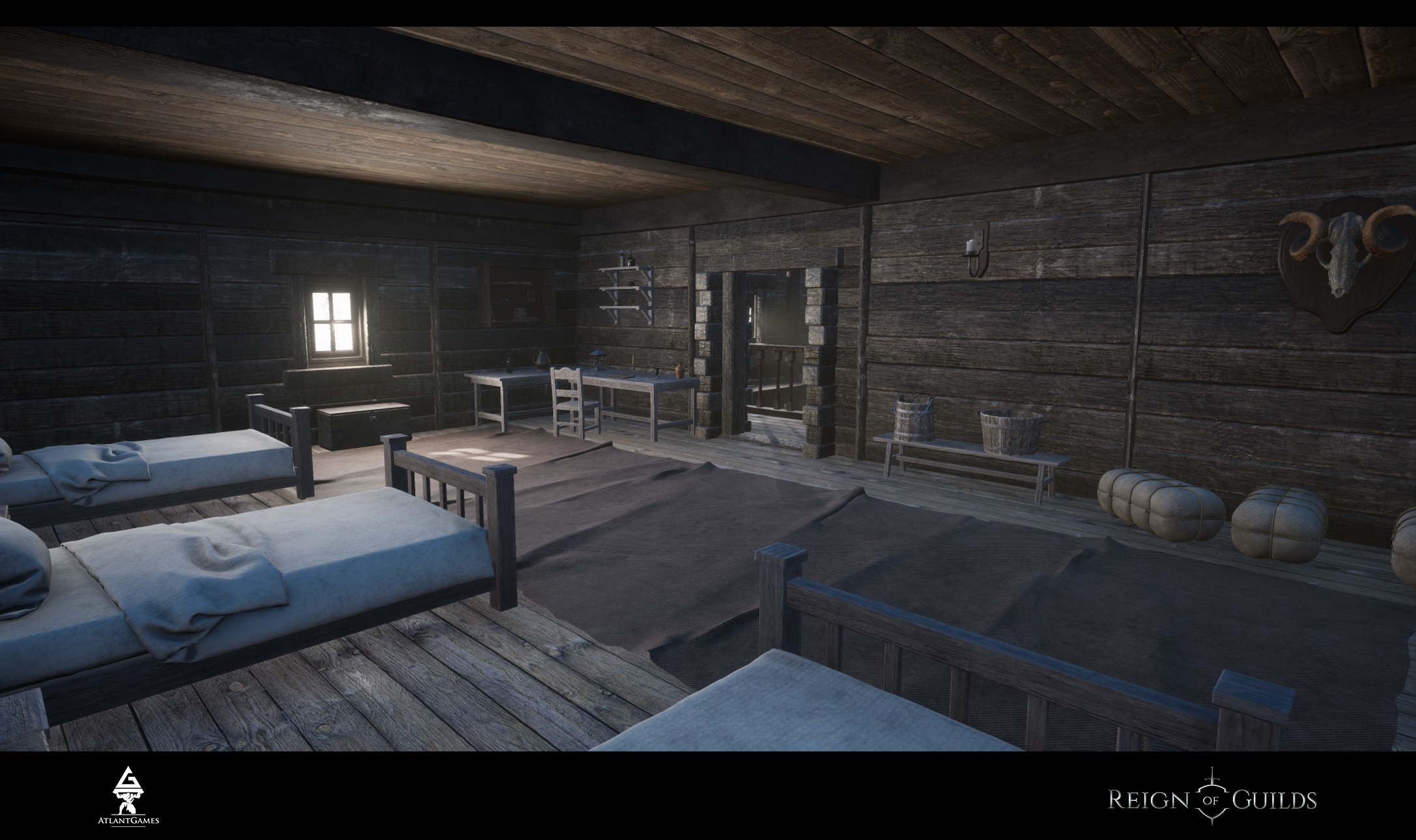 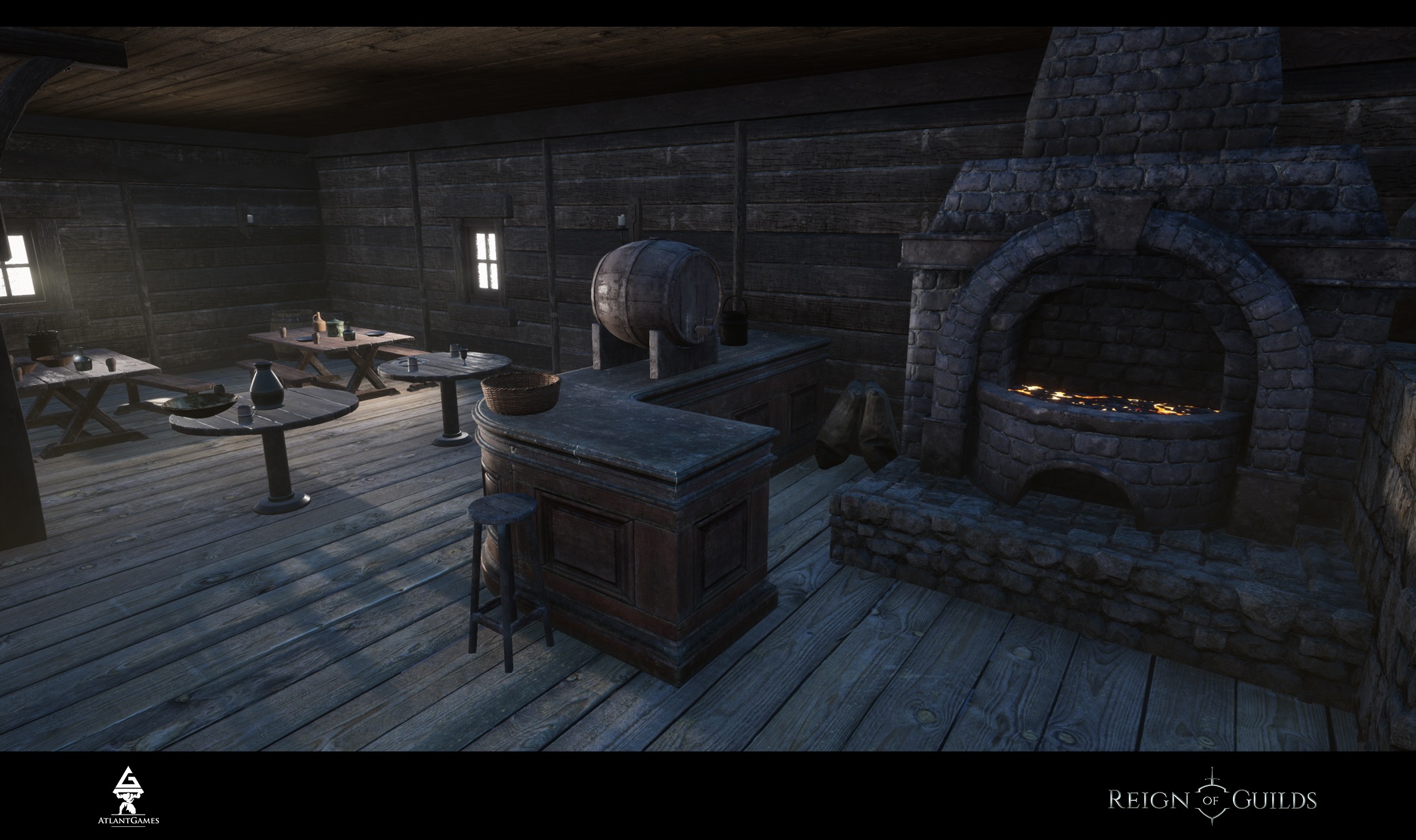 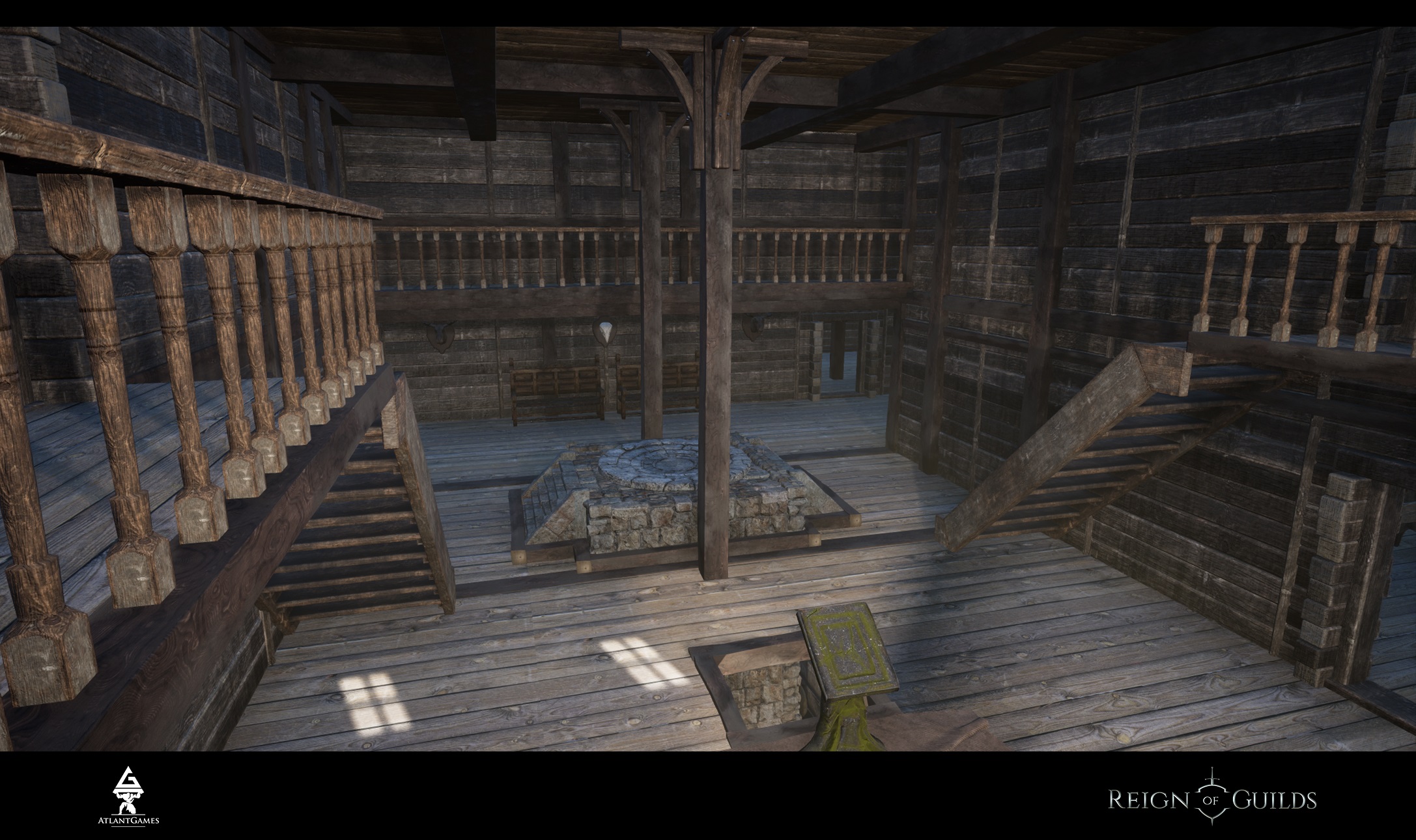 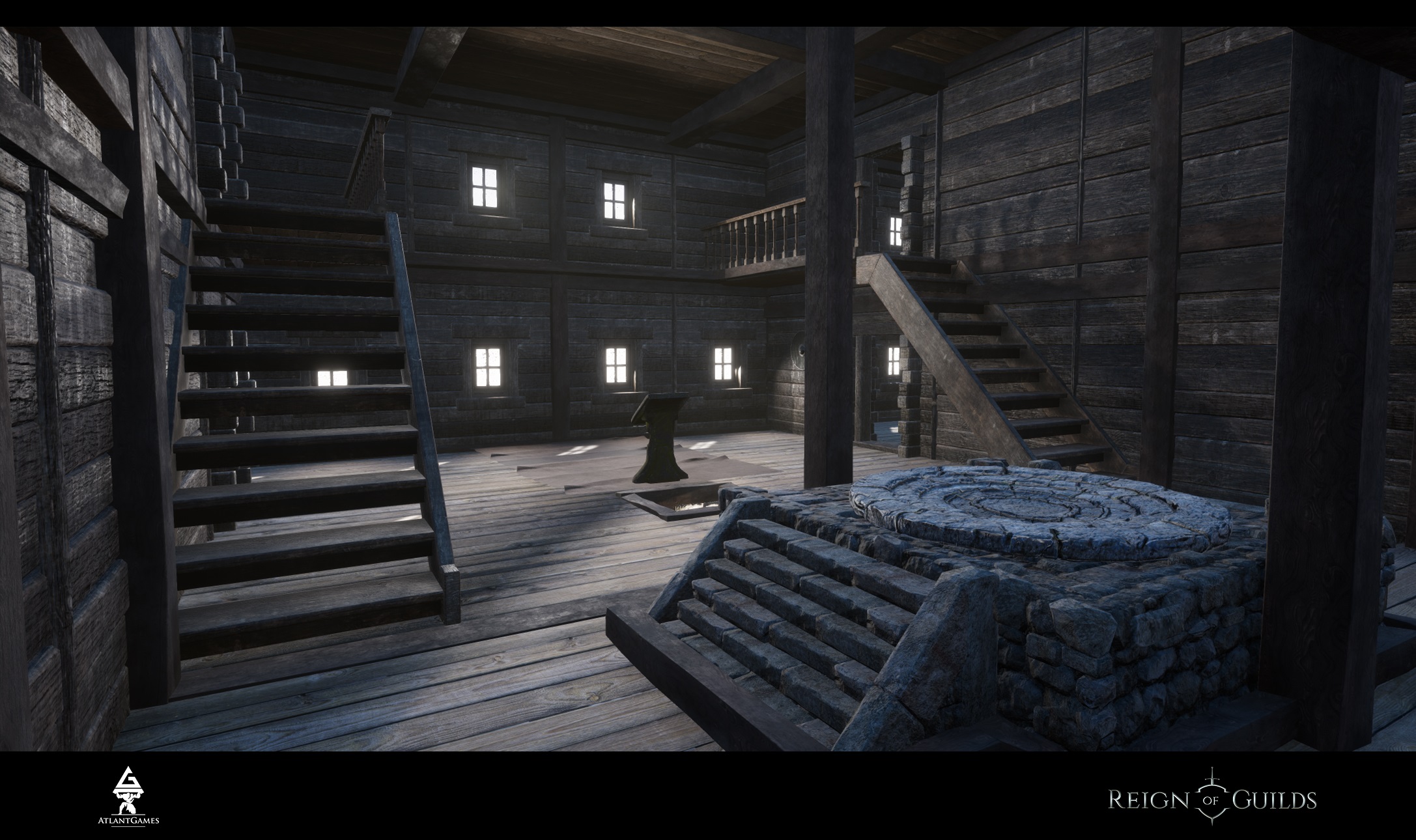 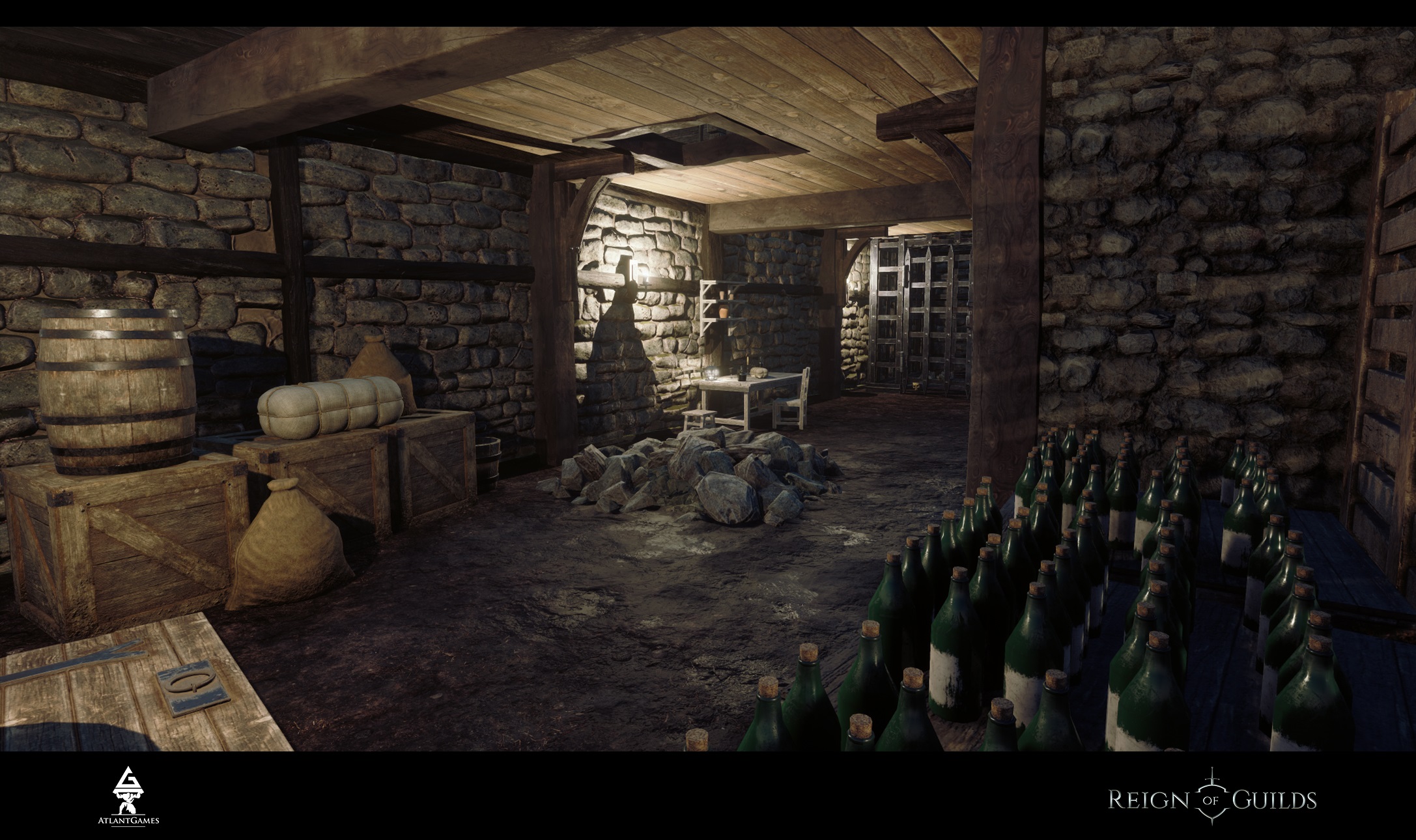 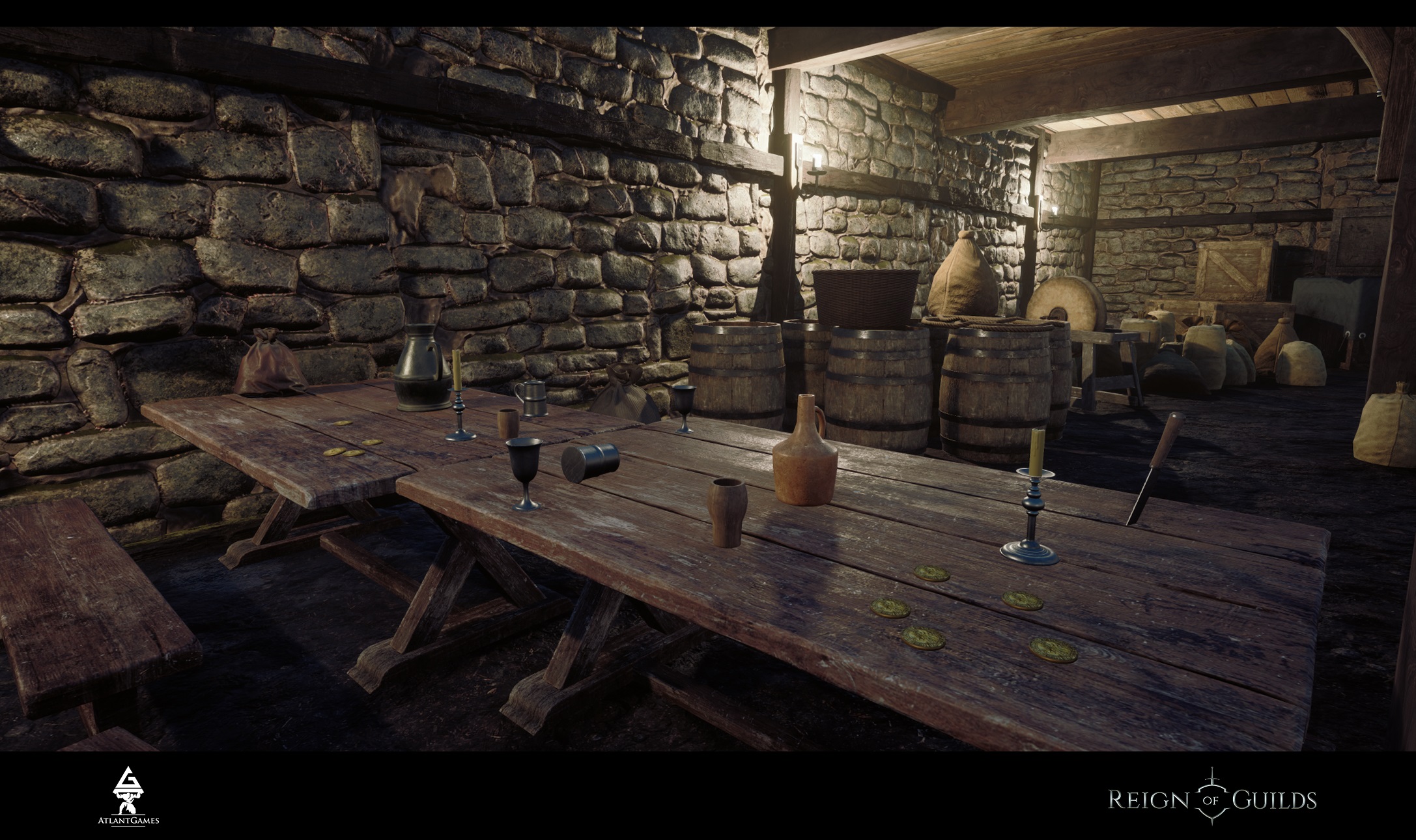 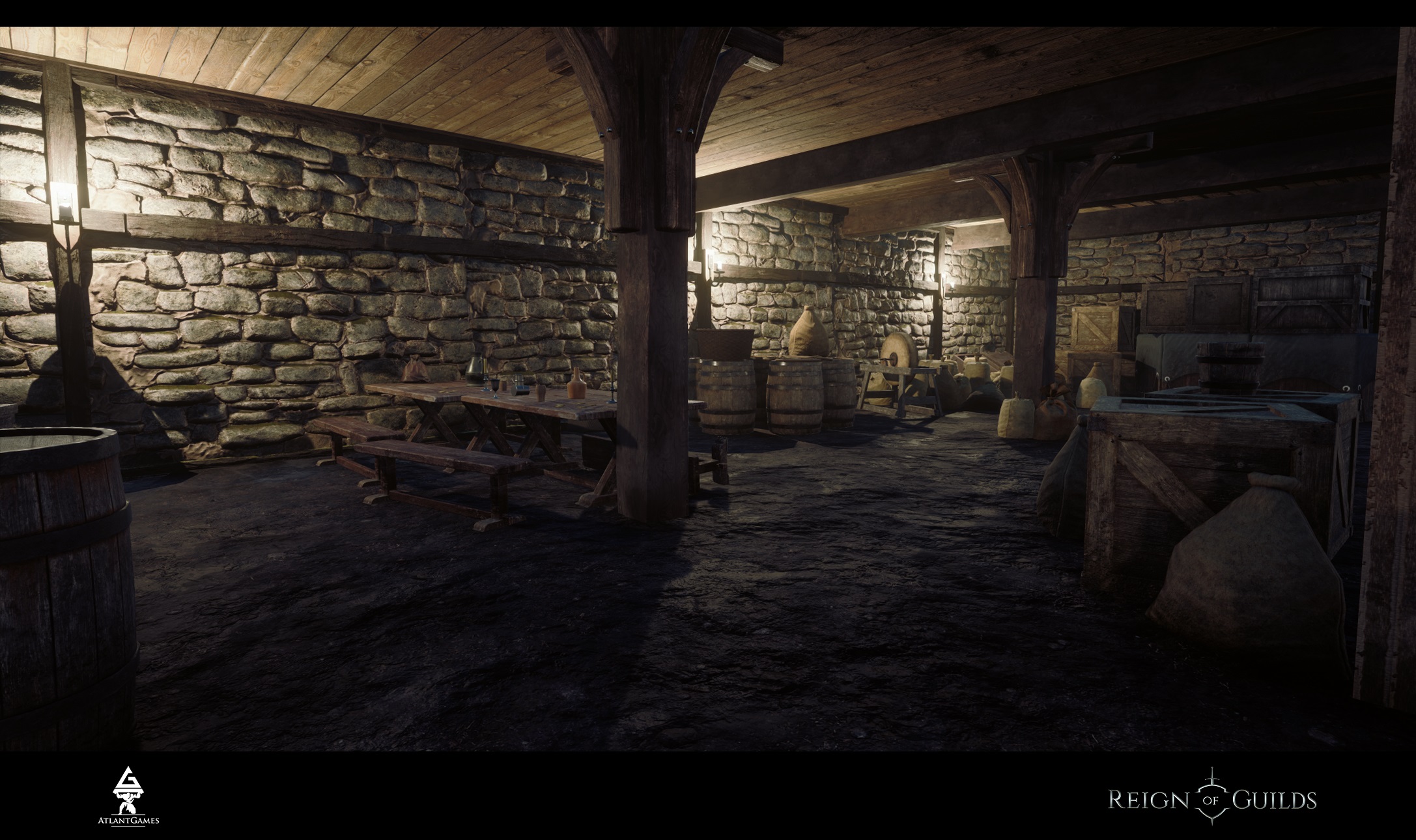 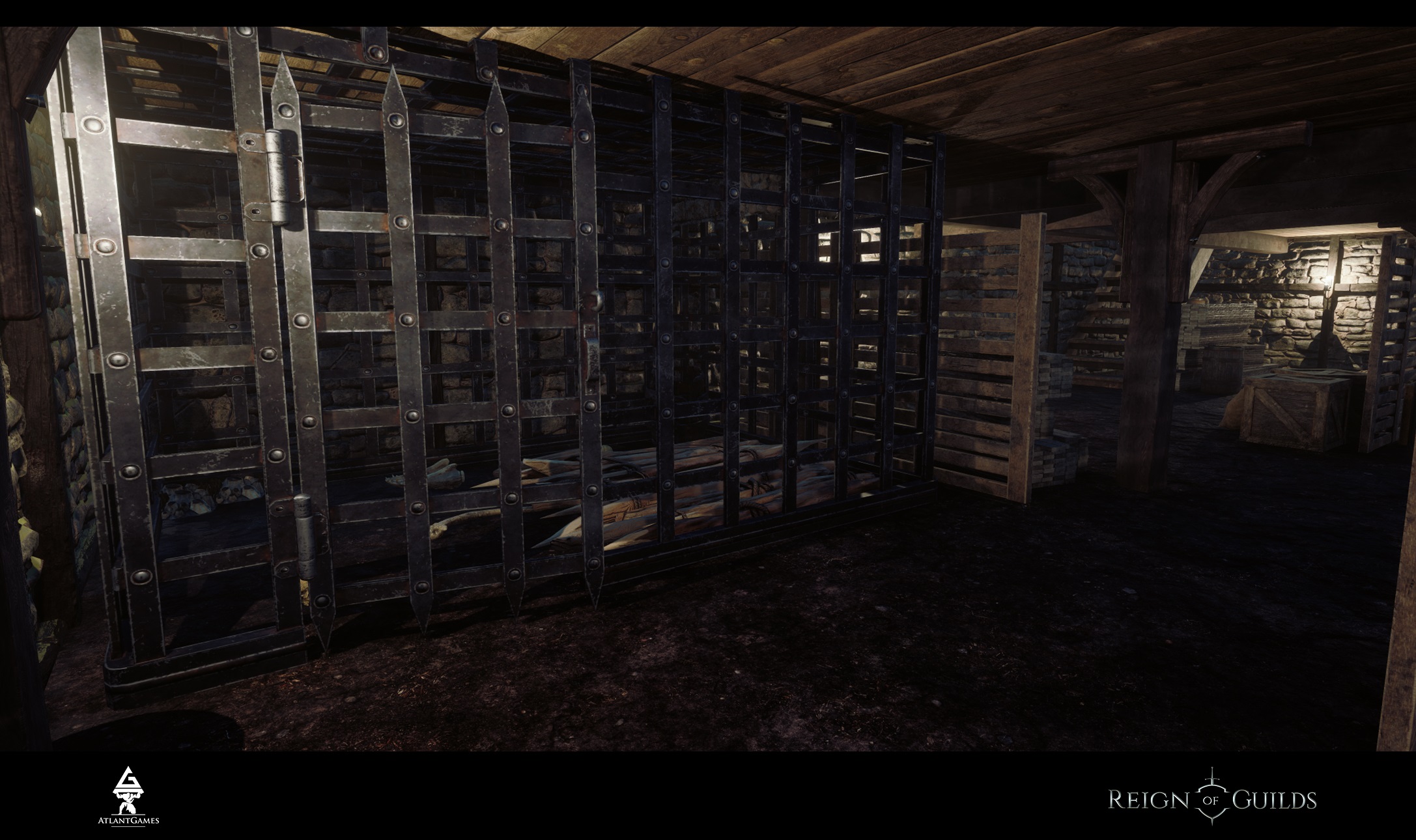 To finish our easy-to-perceive part of the report, let’s look at the new pads. There are different tiers of bulky shoulder pads for the true warriors with an endurance and not for the some fragile damagers! 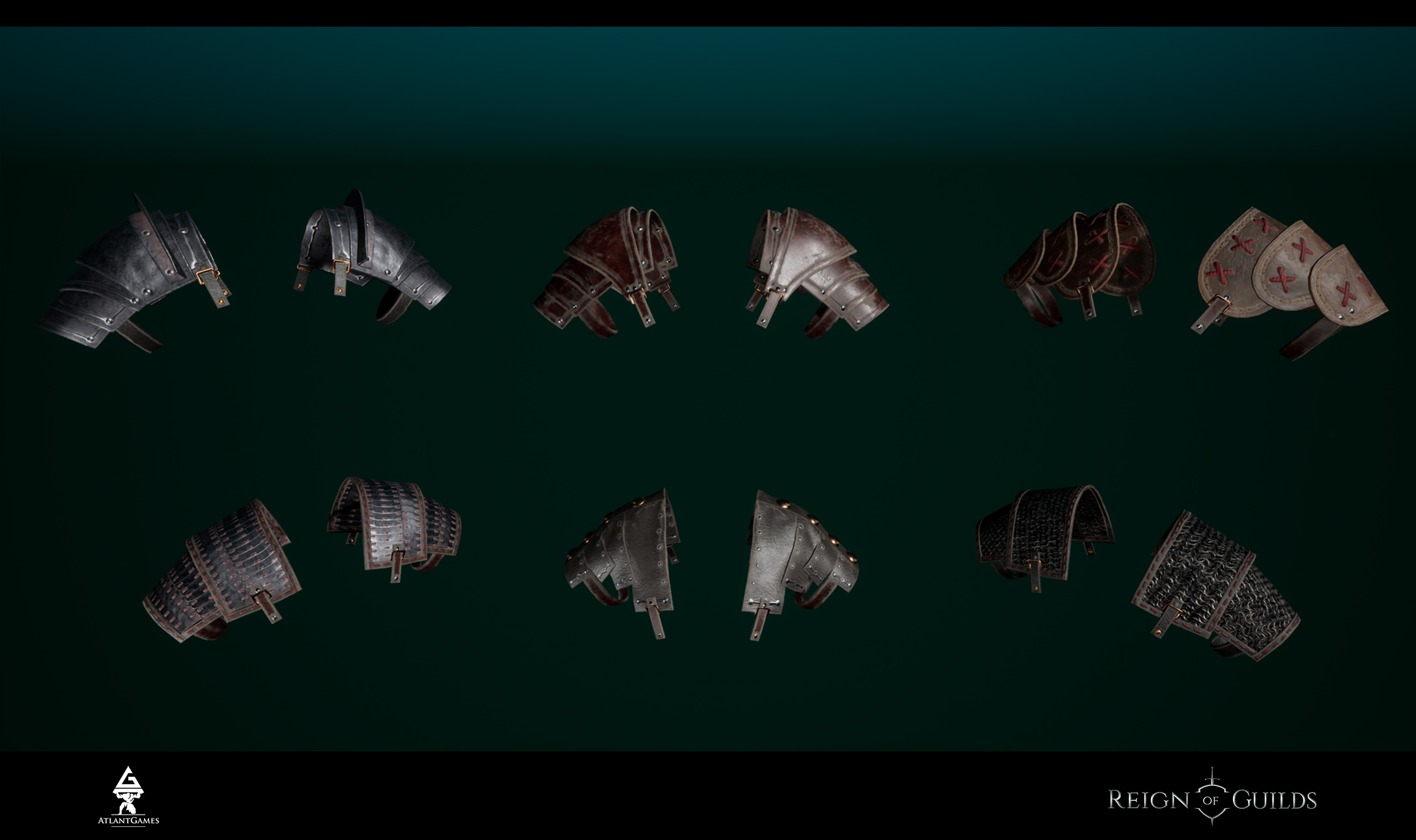 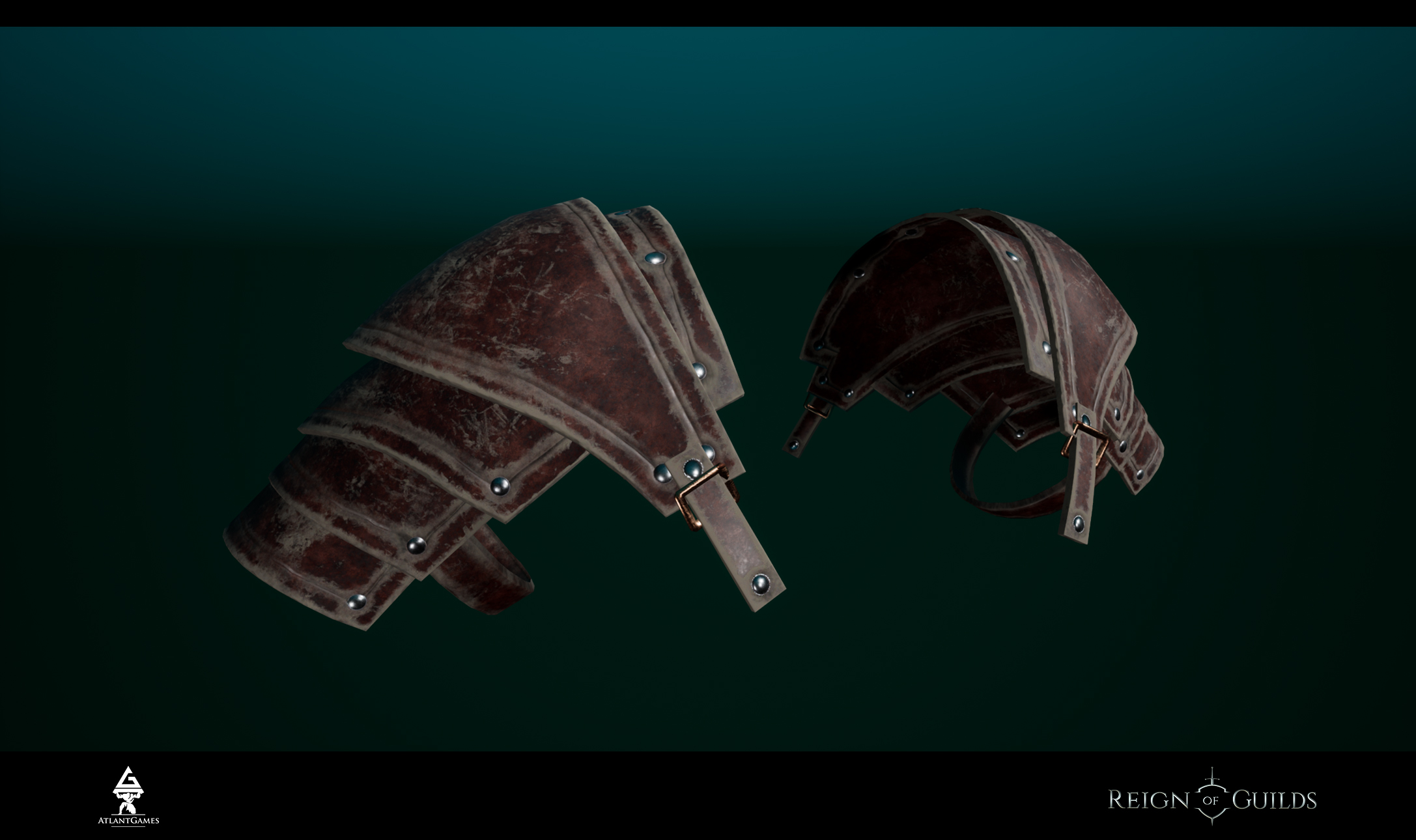 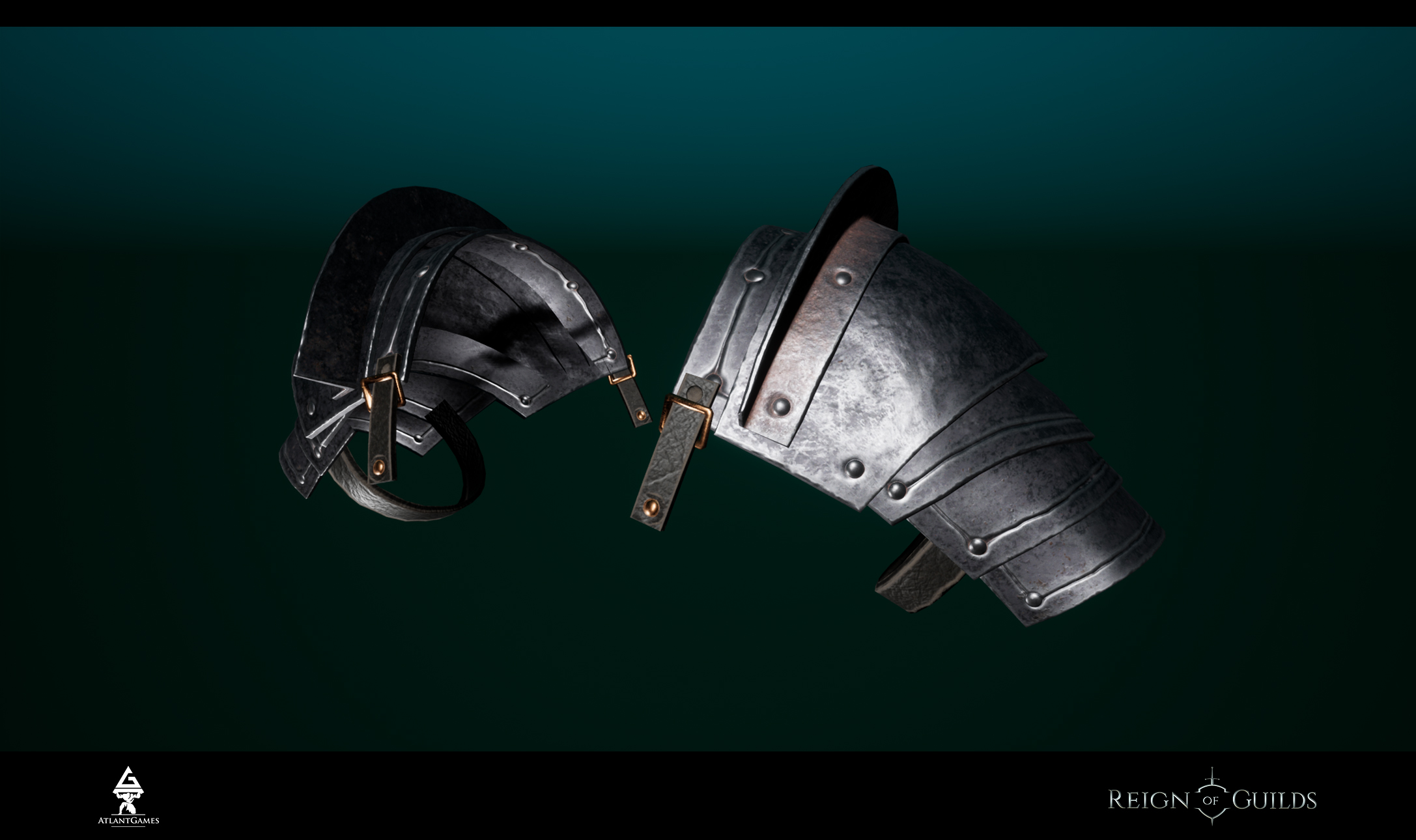 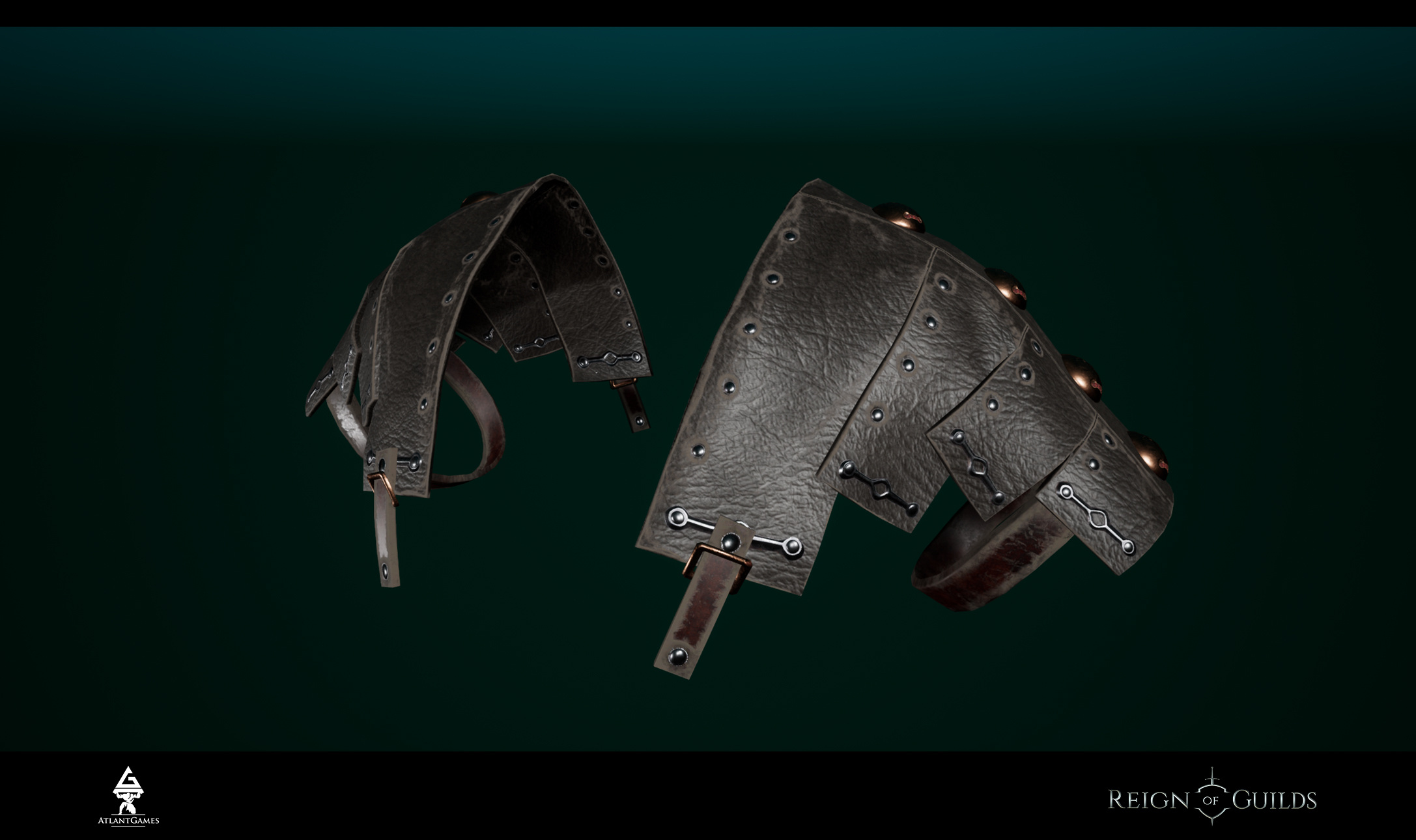 Let’s get to the most interesting! A window to control the castles/county/kingdom (who are able to do it!).

In short, it looks like a book with the bookmarks. This book is alike the book on the castle tablet.

They scrolls the left pages where is the information about controlled object.

These pages on the right side are the sections of controlling.

It’s some kind of a book (inside the team we call it a ledger, as a joke). Such system allows to use a principle of a small table 3x4. It’s an ergonomic decision that exclude unnecessary points. 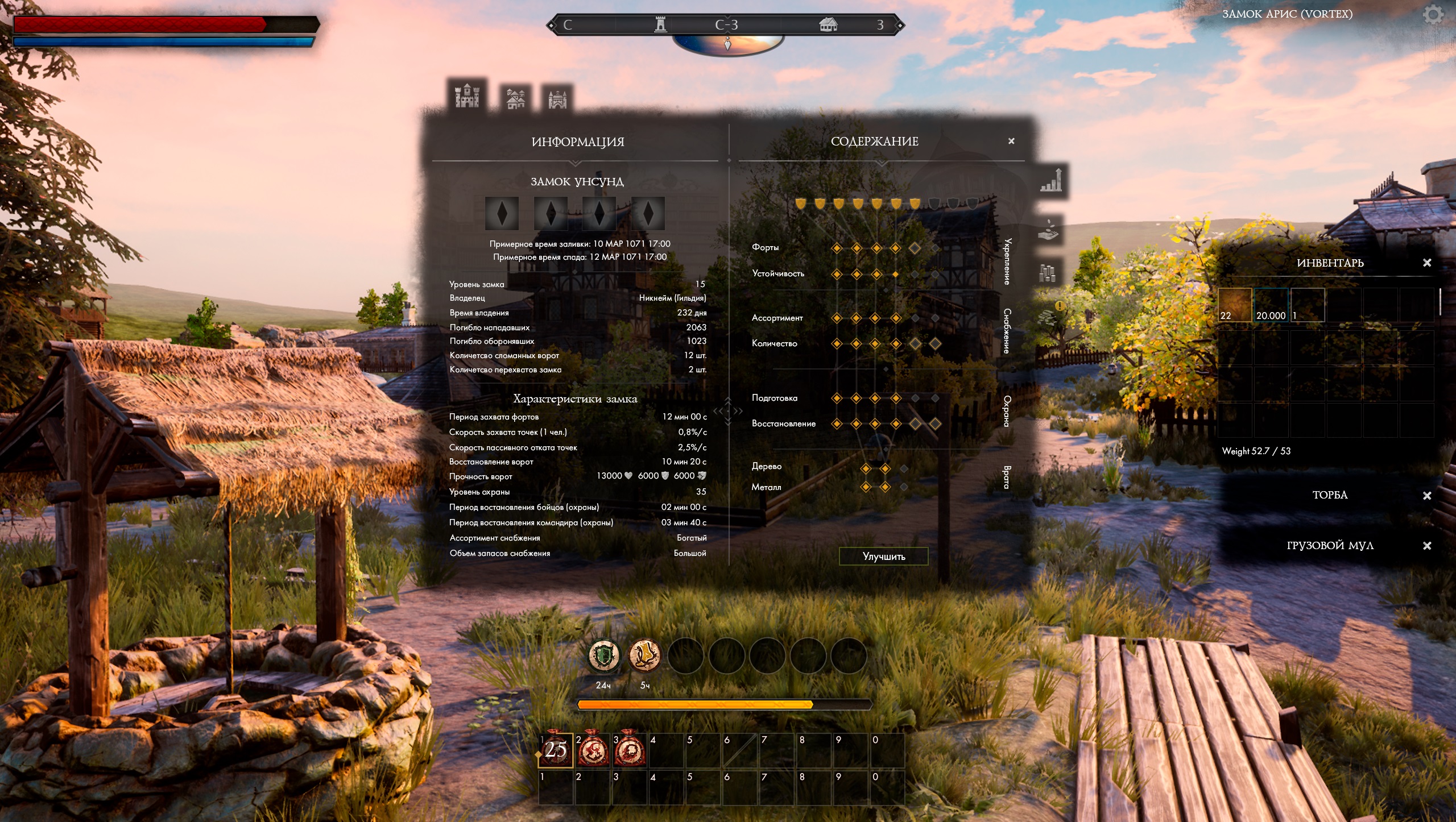 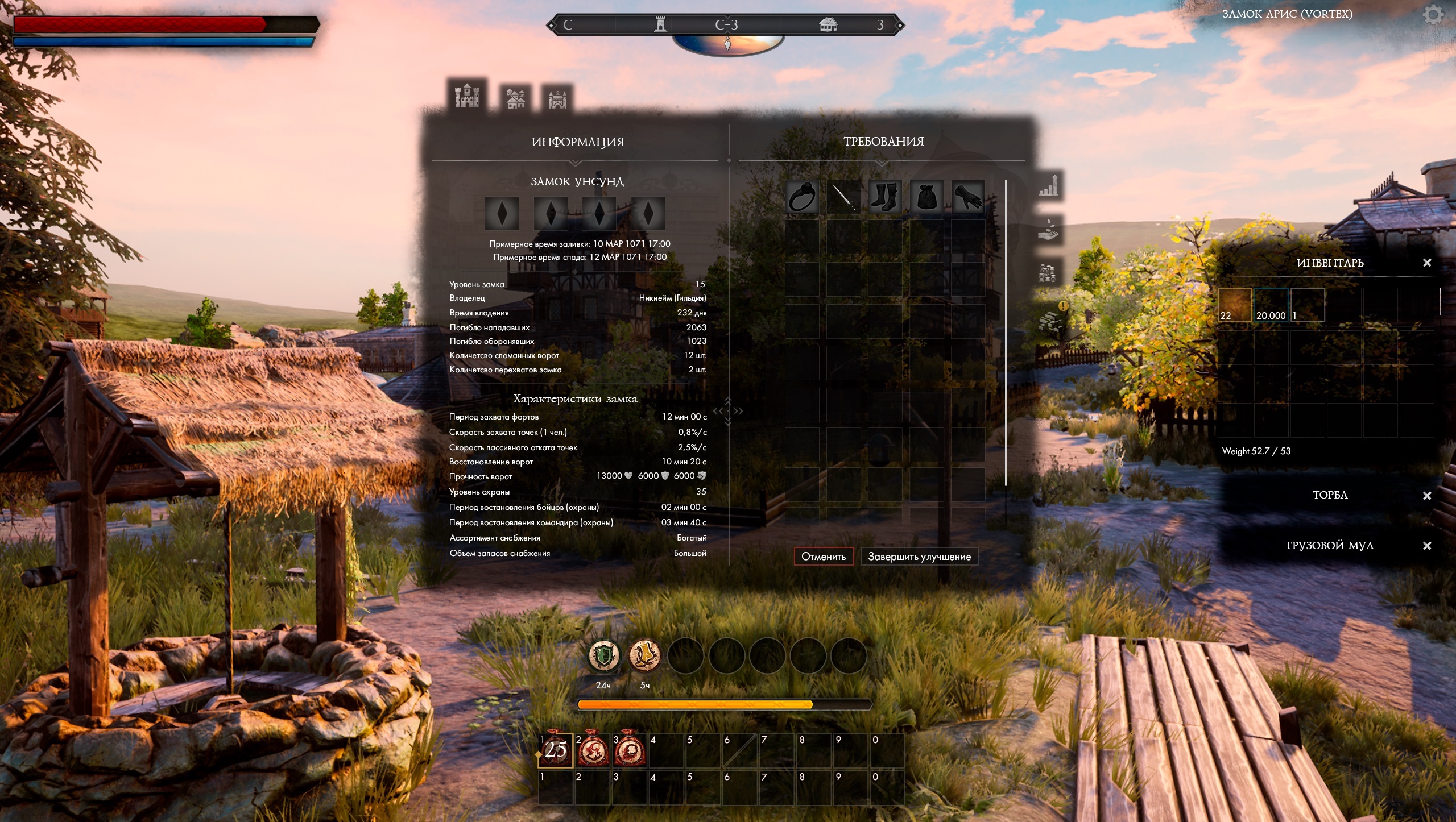 (Attention! There will be a shorter text about mechanics below. Originally it has about 90 pages so there can be some gaps. Ask your questions in comments if you want to know about some mechanics in detail. We will make a note or report about it.) - author’s note.

Let’s review a castle and its parts starting with the left page.

All posts in a guild higher than neophyte have an access to this page.

Crystal is a magic artefact which is mined by the different ways (depending on the level of crystal). It’s a part of a castle (it suits only for the definite castle) and can be put into the castle tablet. After it the members of the guild, owner of the castle, can use the crystal to get some bonuses for character parameters. The crystal can be installed only once. Also it has an expiry date. After “burning” it in the tablet you can install a new one in N days. N days is the period of cooling of a cell (after the crystal burnt). Crystals of different levels can suit the same castle. The higher level of a crystal - the larger the bonus but lower its stamina. And cooling period will be longer. The most forced crystal can be comparable with the coolest one or medium crystal of the next level. 4 cells are for the physical and magic attack, physical and magic defence.

Forts capture time -  every castle has 2 forts at a distance about 100-150 m. It’s relatively small guard fort, established not so much to prevent the first attack but rather to optimize the net (we will tell about that method in the separate report). At the start of every phase of “hollow a castle” (the capturing of a castle is possible) the forts are in perfect condition. Before the capturing of these forts the assault of a castle is impossible. After the primary seizing the forts turn into the capture points (you need to capture it anyway). And you don’t need to capture it once again during this phase. Any other guild need to own these forts during this period except the guild - castle owner. If the guild-owner capture the forts the counter stops.

Point capture speed (per character) - the point capture goes through the presence of one guild (and its allies) in particular range around the point.

By default an every player (here and throughout the text one player = one character) gives 1% to the speed of capturing. . The maximum value (counting all players at the point) is 10% per second. To capture you need to “remove” 100% of point ownership be previous guild and then to “raise” your 100%. After this the point will be captured by your guild. The presence of enemy player will block the capture.

There are 5 points of capture:

It is possible that later there will be more capture points in the high level castles.

Passive decapture speed - it’s a new parameter (Prototype didn’t have this one). It’s characterized by resistance of the point to capture. It means that captured point left by the members of the guild-owner (or their allies) will slowly turn back to the guild owning the castle. By default the speed is 0,5%.

Simple arithmetic: this example shows the value of one player at the point - 0,8% per second, passive throwback - 2.5%. To capture the point you need at least 4 players and to hold this point these players should stay here.

Moreover, the passive throwback corrects the speed of capture. To capture an usual castle you needed 11 players at one point for the max speed (10% per second) and only one player to hold the positions. And this example shows that now you need 16 players to capture and 4 players to hold.

Gates recovery - it’s the time that you need to repair the gates after its destruction. The harder and stronger the gates - the more time you need to reconstruct it. We remain that almost all castle gates consist of 2 main parts:

There are only wooden gates by default. If you install metal grid or strengthening wooden gates the time of repairing will be longer. That’s why every castle owner can find a golden mean.

Gates durability doesn’t require any comments. The only thing is that the numbers are notional. HP of the gates will be about tens of thousands. Also the gates will have an invulnerability to particular types of melee weapons (usual arrows and some kind of magic). In addition we consider the usage of elemental combination to destroy the gates. The wooden gates can be affected by fire but the water reduces the damage. And metal affected by fire and water (tempering) will become fragile  for the hard crush weapons. The battering rams are in question (anyway the rams will appear only closer to release).

Guardsmen and captain respawn rate - it relates to guards - defenders of a castle. Every group of soldiers has its own commander. The resurrection of soldiers after death goes faster but they aren’t respawn if the commander is dead. At the high level castles the guards - mages can be commanders. They are able to summon mobs to the rescue.

With the guardsmen level, probably no questions.

Supplies assortment and supply capacity - it affects the NPC - trader in a castle and the amount and quality of tokens and equipment that respawn in the arsenal. The so-called castle items (“castle staff”) at the start will be the usual items (with different parameters of quality). Later we consider the establishment of unique parameters for these items. No, it won’t give a disastrous advantage but will differ. Only members of guild-owner can use the castle items. If you give such item to the other players it will disappear. Within extended UI of the guild there will be a tab to control the items - which character and when did he take a particular item and where is the item.

Oh, finally we finished with the left page. Still have an interest? Let’s get to the right side.

Maintenance of a castle

This page will be seen only to the members of guild that have the post - seneschal and higher.

Castle condition - it’s shown by 10 slots for the small shields. It shows the condition of a castle in an exaggerated and broad sense. Yes, the castle is fraying and requiring reconstruction. The main damage connected to the sieges.

The castle condition affects the amount of available upgrades. To keep the castle in good condition you need different resources - building materials, fabrics, low-quality weapons, provisions, and thalers for the paying the salaries for the guards etc. So it’s almost the same resources and items that are needed for players.

On this page we can check the connection between the condition and available upgrades. If you fully improved your castle you need to keep this perfect condition. A terrible state will block or destroy upgrades.

If the condition becomes 0/10 the castle will be empty and guards will leave. The capture of such “Flying Dutchman” will be as easy as possible. But before building on this castle for your guild you will need to repair it to 1/10.

Now let’s get to more difficult mechanics - it’s a superstructure to the castle condition.

Economic war at the castles

At first sight it looks ridiculously. But let’s shed some light on this name. The sieges mainly affects the condition - actions of siege weapons (catapults and trebuchets) and constant destroying of the gates. The castle is vulnerable to the siege weapons only at the moment of “hollow castle” phase.

And then the attacking side realizes that the castle is fully upgraded and has dozens of defenders and chose the tactics of destroying - to use catapults and methodically destroy the assets of the guild-owner. It’s clear that they need to defend the catapults because enemy guild won’t disregard it. We want to remain that the siege weapons of such power cost a lot of thallers. And there is a chance to invest in weapons, lose the siege and thallers without damaging the guild - castle owner.

It almost doesn’t require any comments. It correlates with the castle parameters described earlier.

A little coloured diamond - is a chosen position to improve.

After the choice at the “Requirements” page the list and the number of resources and goods will appear to upgrade it. Confirmed the choice you will see the sticker remaining of required resources. When upgrade is finished a little diamond will get a diamond frame and a castle owner - smile.

If upgrade is inactive because of the worsening of castle condition there will be only diamond-frame and an owner will get only sadness and longing.

The “Requirements” page is open for the all posts higher that neophyte but:

Well, we hope at least someone’s read it.

In conclusion we tell only that the moving to new hardware wasn’t shoothly. The old site on the new configuration of web-server works badly (it doesn’t relate to the forum). And in general the fragility of WordPress shows its true colours. In connection with it we expedite the moving to the new site, even if it would be emptier.

So all that’s left is to wait for the full registration of NS servers and we can rest easy.

Perhaps, there are enough letters in this report, so: