Come on, we all have been waiting for it for very very long. We can relate to those who happened to begin doubting the vitality of the project. They must have had their reasons, but they were for nothing.

The previous report dated all the way at the end of March. After this, we along with the whole world plunged into the new reality of business processes during the pandemic.

The main hurdle turned out the investments into ROG from the real sector of our motherland economy that was heading towards zero at double time.

The main task was set to optimize the structure of the team and find additional funds. This was no longer about the increase of the development rates, but it was about the optimal balance between the loss of productivity and the decrease of overall expenses.

In March, the decision was made to change the structure and the direction of the team's activity. We decided to no longer look for funds with the help of crowdfunding under the promise to produce a dream game. Instead, we decided to share 'spare parts' of ROG at UE4 Marketplace (MP).

We can state right now already that this was the right decision:

As a true professional product, the assets were warmly welcomed and appreciated. As a reminder for you, it took approximately 4000 man-hours among 5 team members to model and animate armor parts as well as building up the module system principles.

No doubt about it that we had to spend a lot of time on fine-tuning, various fixes, and unification of armor and clothes assets. All the efforts have been fully reflected in the Documentation.

There is no intent of stopping from our side. In the next two months, we will refine and finalize the mobs (stick insect, bear, mammoth, deer, boar, wolf, leopard, dwarf) and bring them to MP.

With the help of the mobs, we are planning to double the profit from assets not just due to their sales but thanks to the traffic that they will indirectly bring to the armor and accessories.

What does it have to do with the development of ROG?

It has a direct relation to it since, apart from bringing money in, we're finalizing stuff that will be in the game.

What are the problems of the development?

Apart from the financial ones, it is the networking. The SpacialOS that took a lot of our time did not produce any solution for UE4 and they even moved it in a closed section. 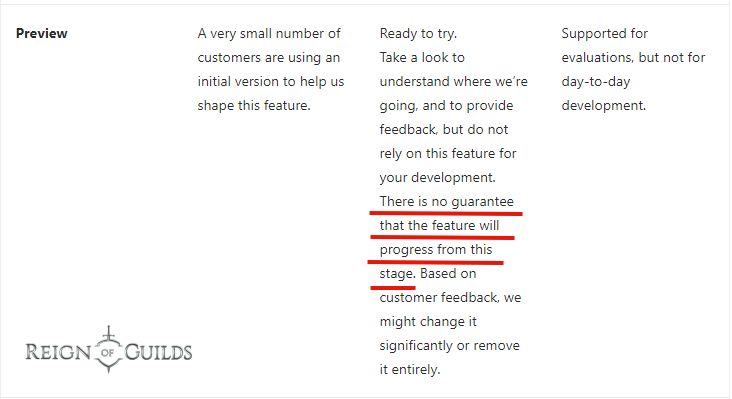 After merging with ZEUZ, they set the direction on the development of a 'plug&play' networking solution for session-MMO games trying to compete with the solution by Amazon.

We got alerted by the difficulties that made them bury their 2-year development of a seamless solution. We are fully aware of the facts that they had a way bigger team and more options available.

Nonetheless, after we are done with the assets for MP, we will return to our solution. Then we will be preparing it in an incomplete form for the Alpha. This means that the players won't be able to interact through the seams but the transition through them will be without loading screens.

When is the alpha?

We don't see the point of launching the alpha without the networking solution even if it's a simplified one. Therefore, at first, we should be done with this stabilization of the application in about two months, then we will take our networking solution that should be updated for the coming version 4.26.

Is it worth waiting for the alpha?

Surely, each and everyone should decide for himself or herself. We can just state the fact that the situation in the studio is much better than it was in 2019, let alone the beginning of 2020. We will resume work on it in 2 months, and how much time it will take will directly depend on the finances and success at MP.

Why wouldn't you show the alpha with the current single-server solution by filling the world with the content?

Alpha is a very important stage for us in order to continue the communication with two publishers. The networking solutions is the main question since our solution in 2018 surpassed, for instance, the current solution by Atlas at the time. And we should showcase it in full splendor in our new world, not just in a Prototype.

Why were you silent for so long? Will you resume regular reports?

One of the steps for the restructuring is the minimization of expenses including issuing the reports since each report in a text form costs the studio at least 50 man-hours excluding the translator's service.

Yes, we will resume issuing the reports once in every 1-2 months.

Is there good news?

Strangely enough, there is: Our game was included in a game list at UE4 in Eastern Europe. You may watch the video about it here.

It's a good question! Here we go!

In the process of preparing the mobs for the MP, we got 4 tasks ahead of us:

We will use the deer as an example that is work in progress currently.

Remastering of textures is a rather simple task even though it is a demanding one. But even models without the fur start looking acceptable from all directions with their textures remastered.

After this, we'll redo the fur in Maya all over again but this time we rely more on the procedural generation. For that, with select several areas on the deer based on the principle:

Next, in Maya, with the help of the next-gen Hair, the fur turns out very decent and it looks something like this:

The problem is that the conversion of such a fur into polygons automatically yields this kind of results: 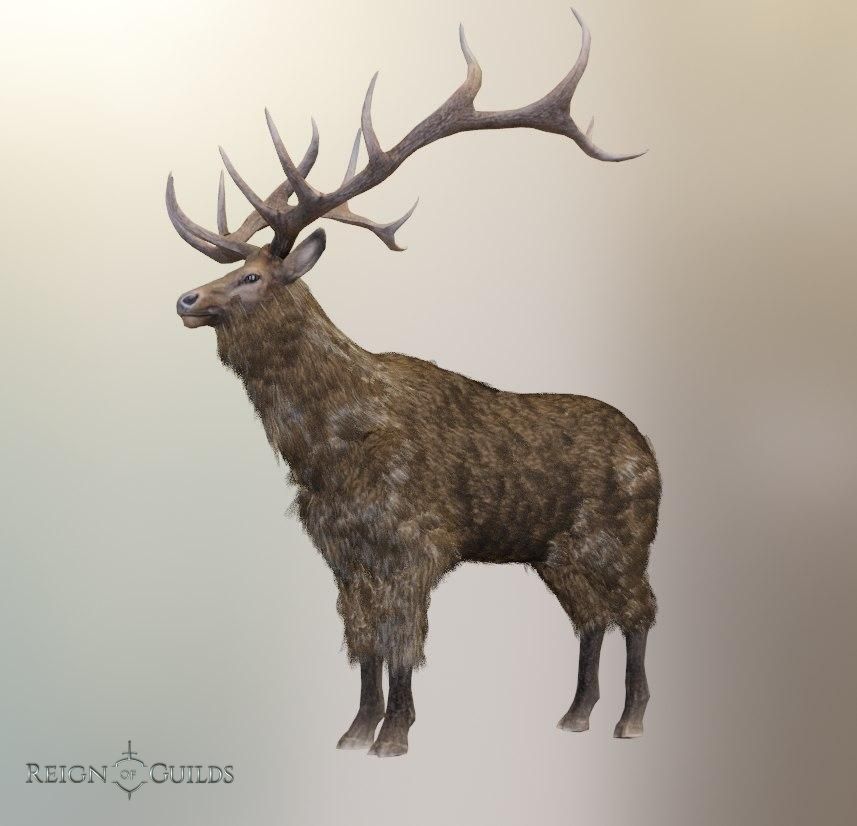 And, of course, this is rather hilarious, but, in reality, we must do it by hands all over again. This is exactly why the polygonal for is such a complicated endeavor.

Why does the polygon fur still exist in 2020?

Even though the new groom technology is rather optimized and it is twice faster than NHW, it is still twice slower than a mob with a polygon fur (up to 100k vertices per fur) nonetheless. Thus, the polygonal fur will still remain the most optimized solution for video cards of 111 class and lower.

As far as animations are concerned, we got a completed base set for almost every mob. However, in order to implement a more complicated AI, the set is rather lean. What is particularly lacking are movements to sides and quick turns.
Now let's go over what is done when it comes to mobs.

We begin with the models. Wolf is the last mob of animal origin from the list. You can’t imagine how many tries it took, yet still we are not satisfied with it and rate it as C+ only. We're going to redo it but as a part of the described above MP.

This is how it looks: 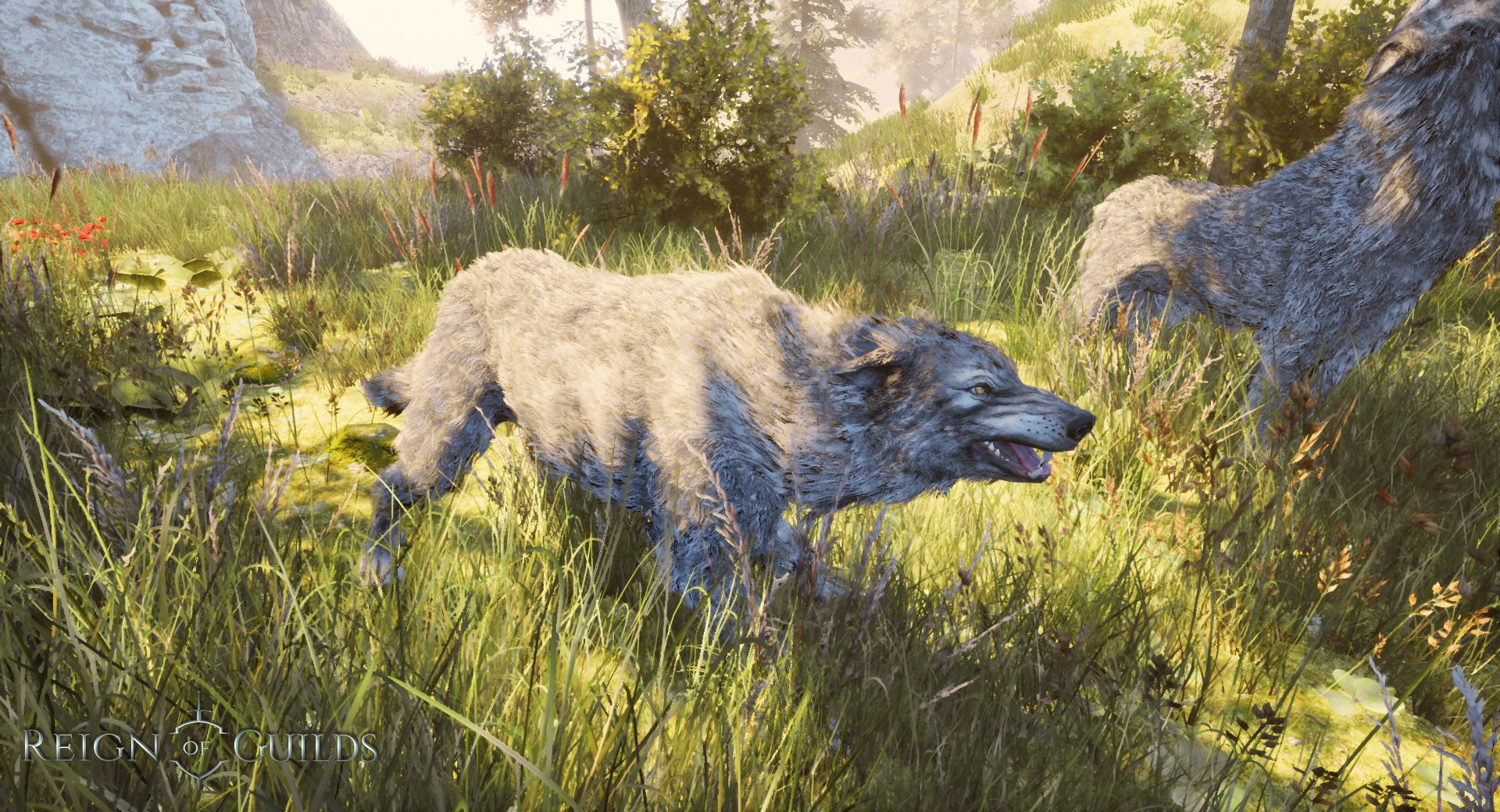 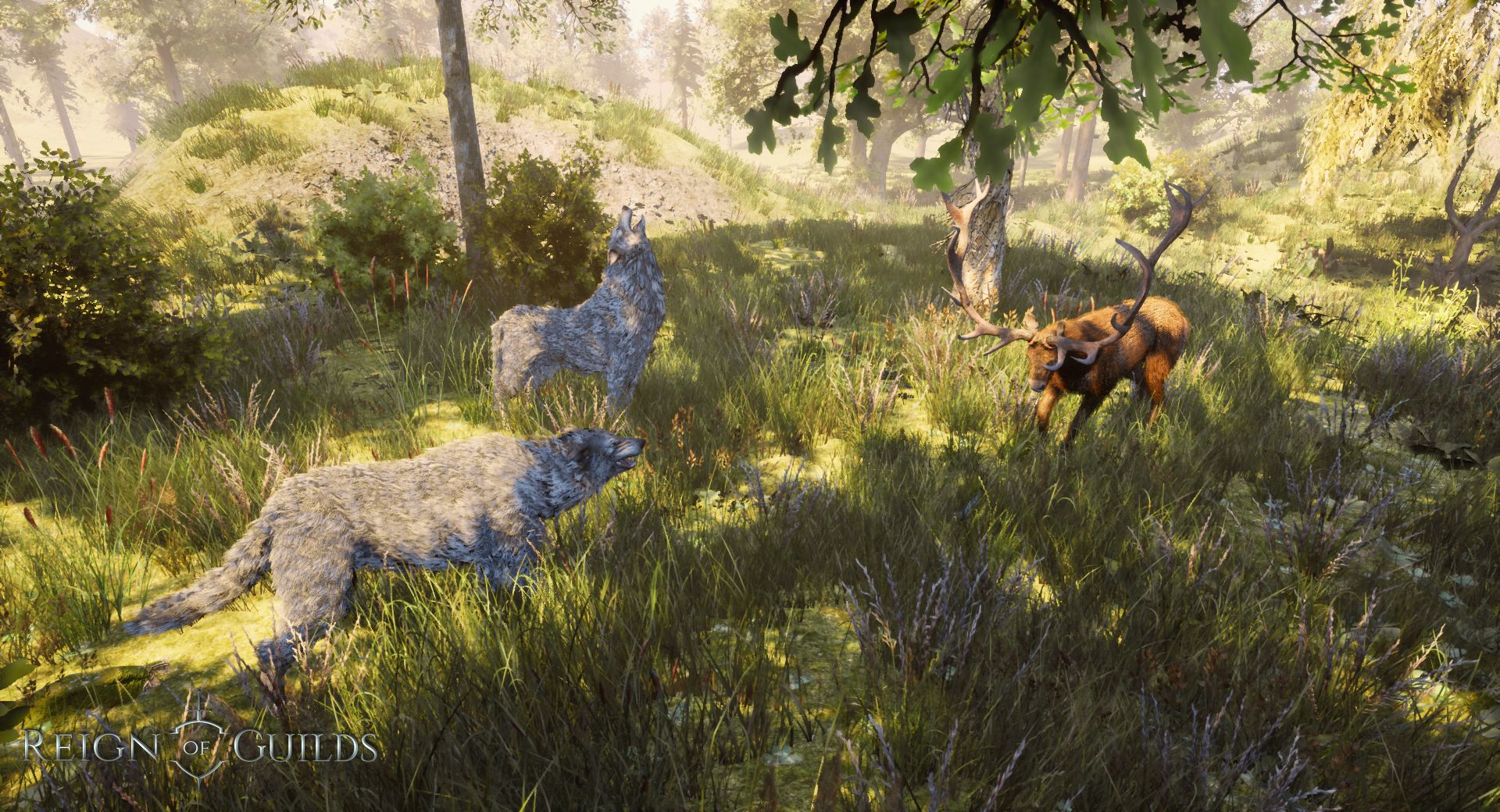 The main problem lies in the roughness of the fur that must be retextured and get a new material applied that is still to be made.

There are plenty of animations ready. This is why we decided to unite them in GIFs and show them in a more suitable form for the game

Begin with it, the animations are from right to left

The last two animations from right to left:

Its animations are very abrupt and quick, this is why even at 24 frames-per-second they look very jerky on GIFs. Regardless, they are from left to right:

Rendered specially from the first person view, from left to right:

And at last, a mammoth with the most complex attack (root motion). To express the scale, we specifically placed a character of 1.95 m height and the smallest house near it.

4| Upgrading and optimizing the props & environment

During the development of ROG, Epic Games managed to conclude partnership agreements companies that were doing really cool stuff. One of them was Quixel. One of their products was MegaScans. Basically, they were producing textures by scanning the surroundings. This is the most technologically advanced method that gives astonishing results in the end. And the main thing is that the quality is incomparably higher than what can be done by hands even at lower resolution.

Surely, when Epic Games made such a gift to all developers with their engine, it would have been silly not to try to update materials and textures of existing models.

Here, as a comparison, are old textures made by hands at 2K resolution combined in a rather complex material: 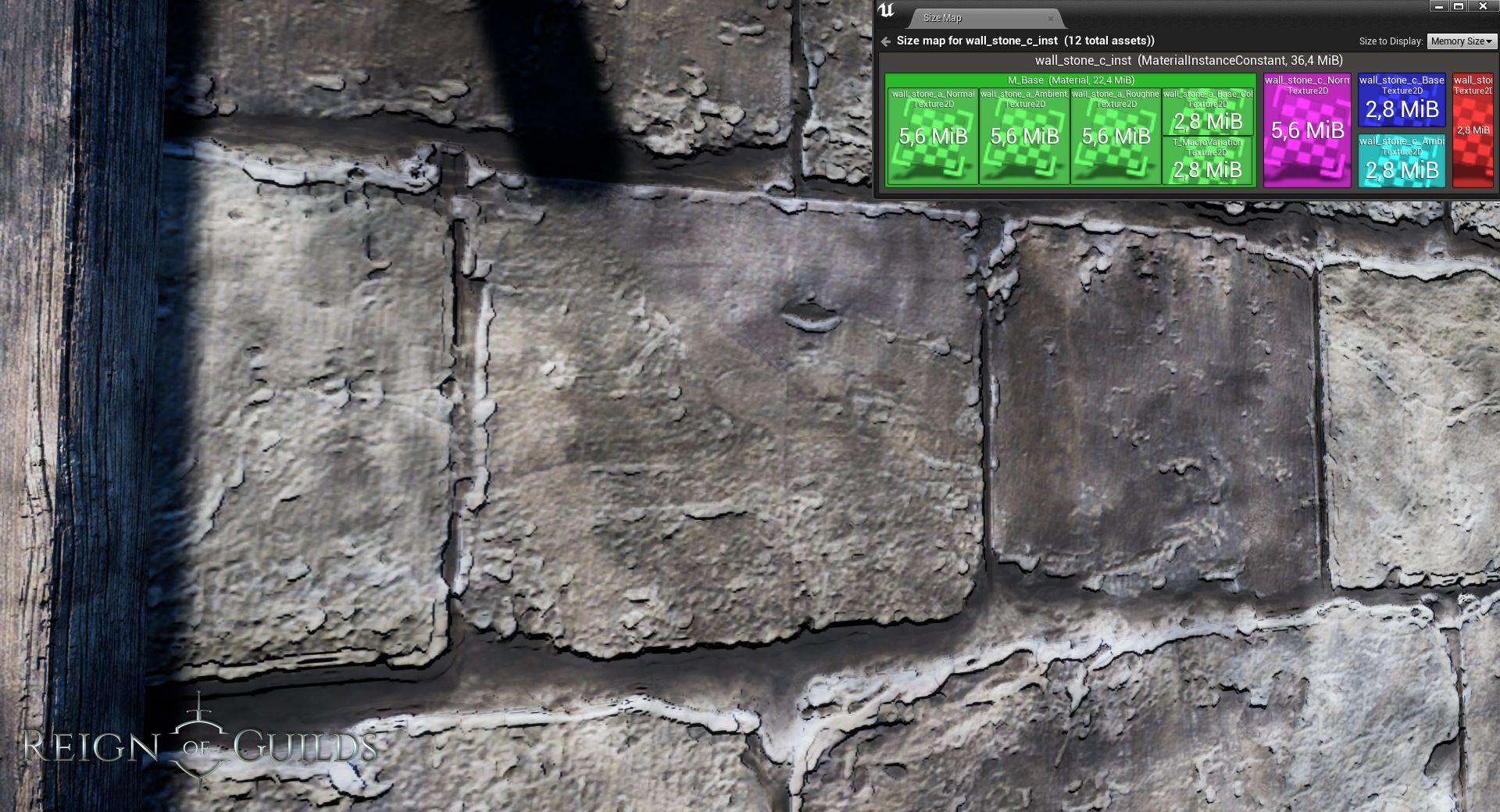 And here is how photorealistic textures at the same to 2k resolution look like combined in a simpler and faster material: 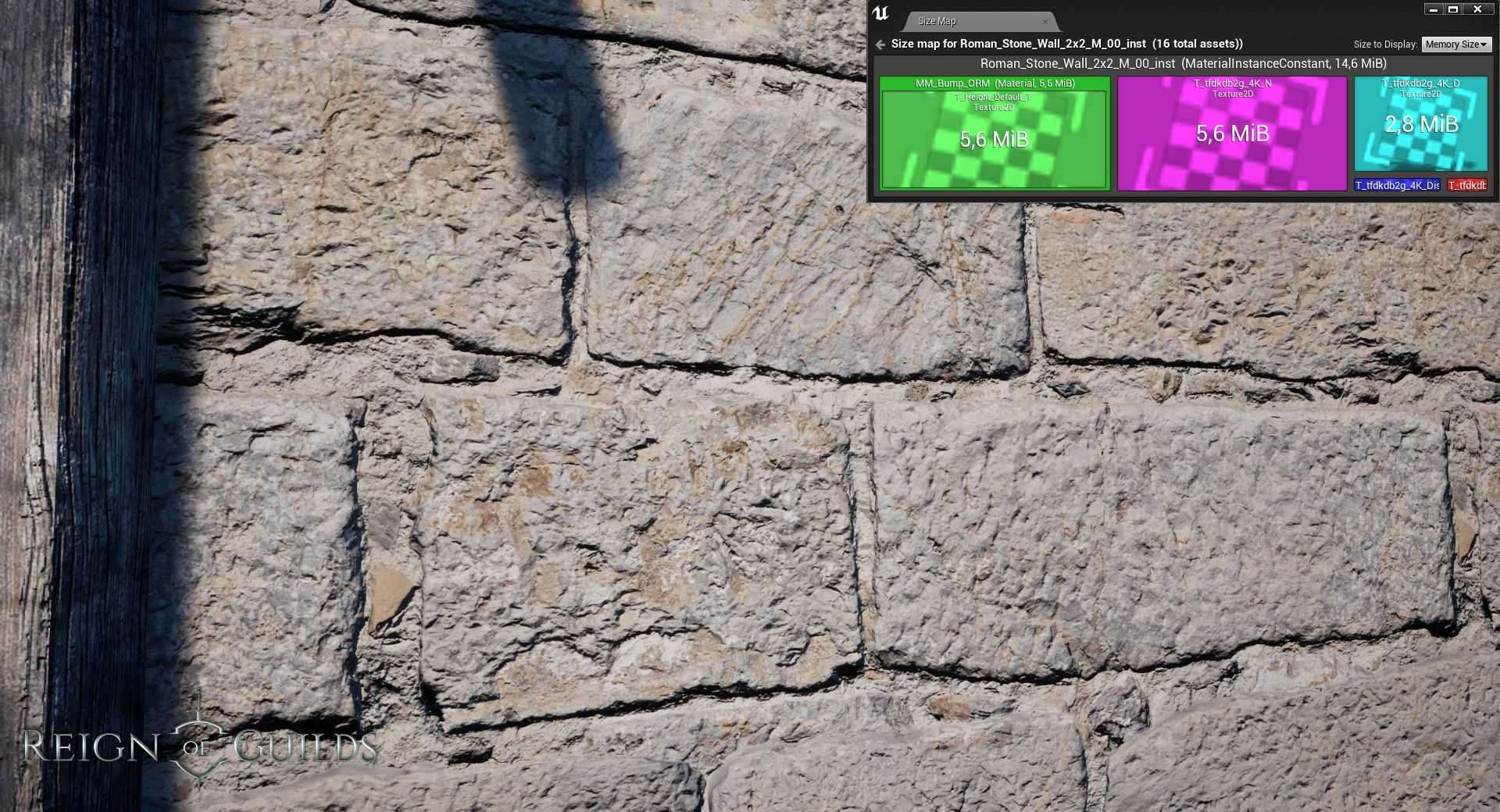 In the end, we are getting improved visuals with 14,6 Mbytes vRAM against 36.4 Mbytes .

In other words, with the simpler and faster material at the same resolution we have a way more detailed visuals.

Another advantage of photorealistic textures that were scanned is comparably small loss of quality when decreasing the resolution. This feature makes an image on a PC of a basic level not that dull and blurred. 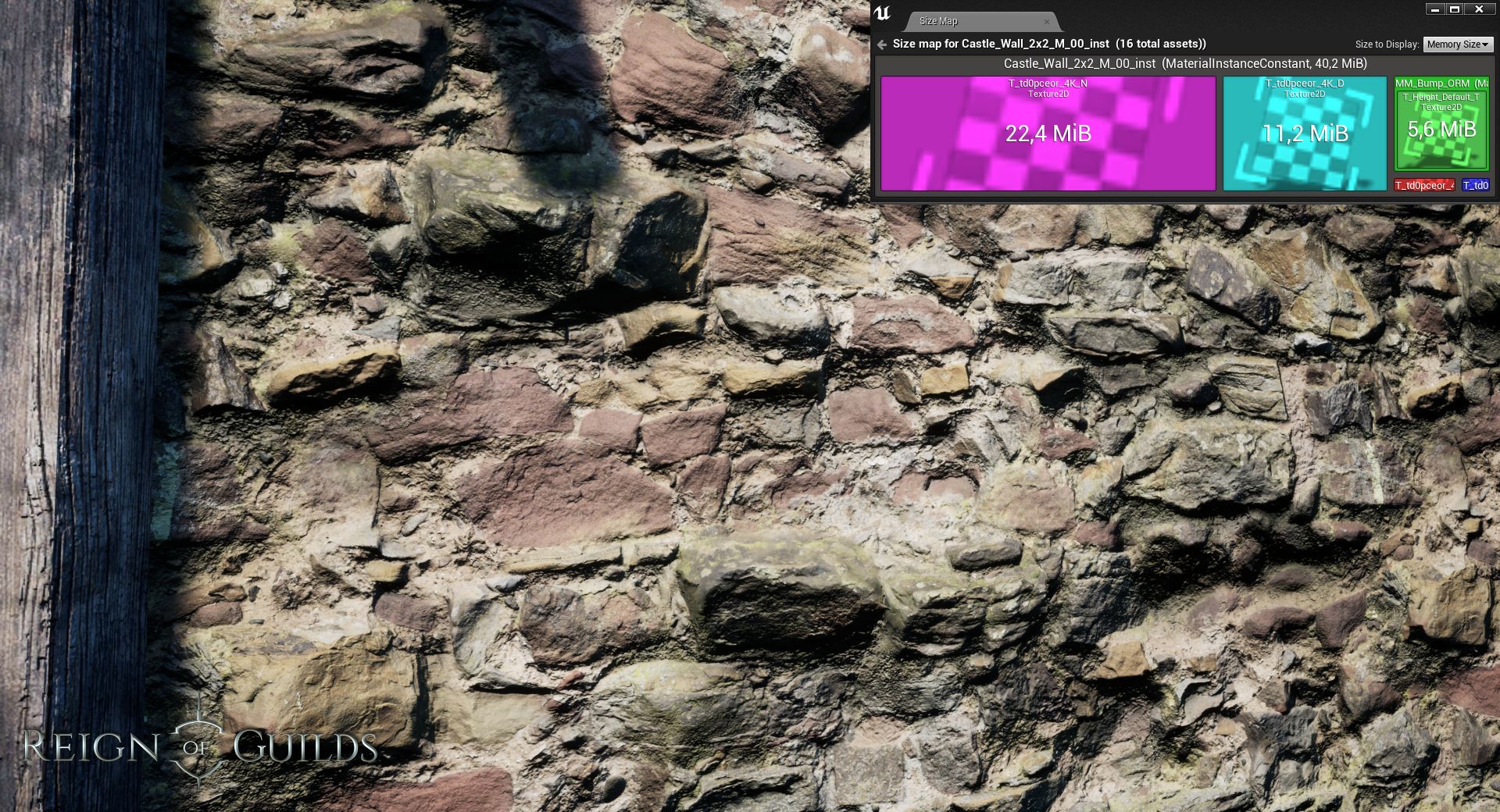 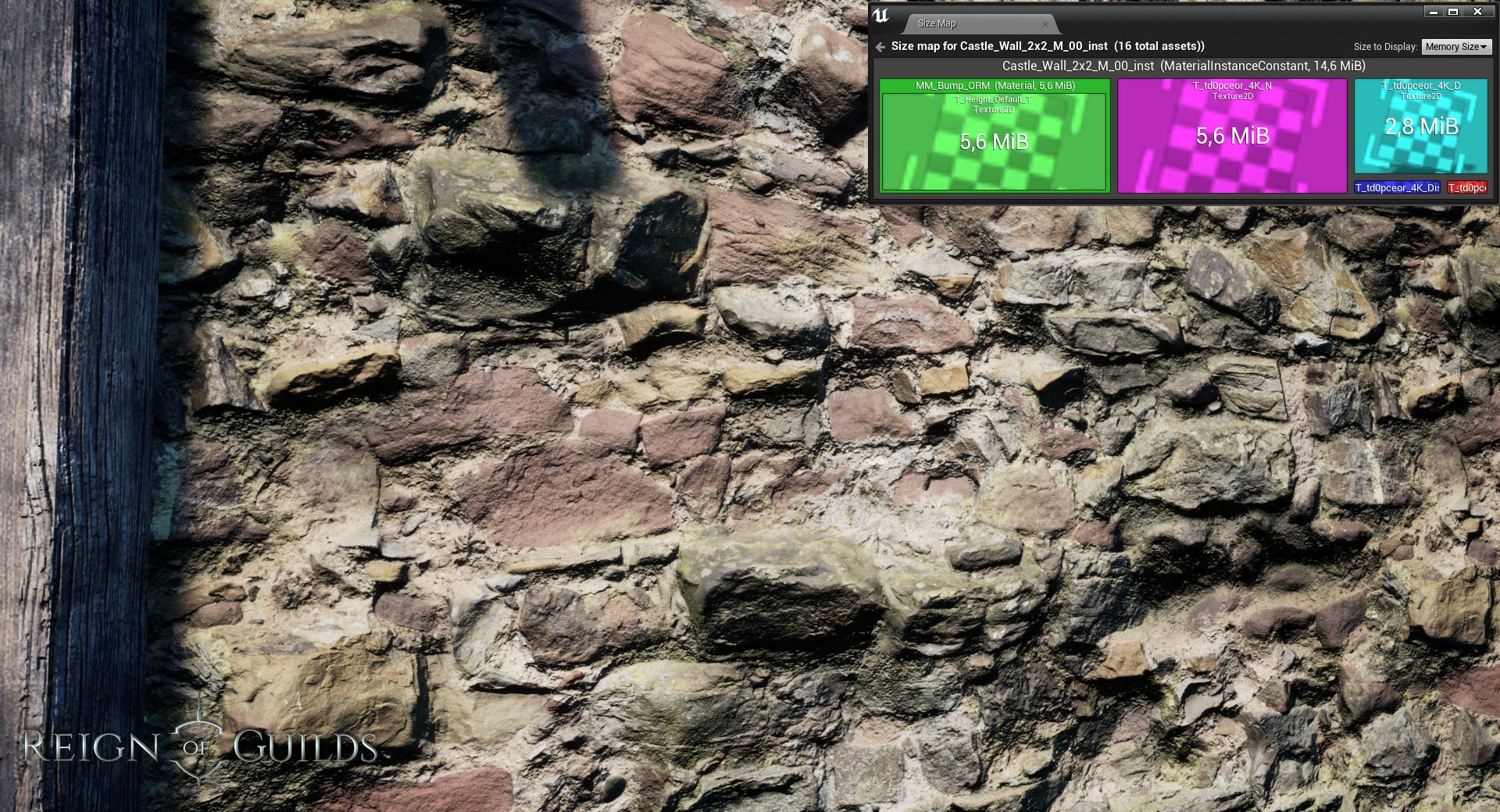 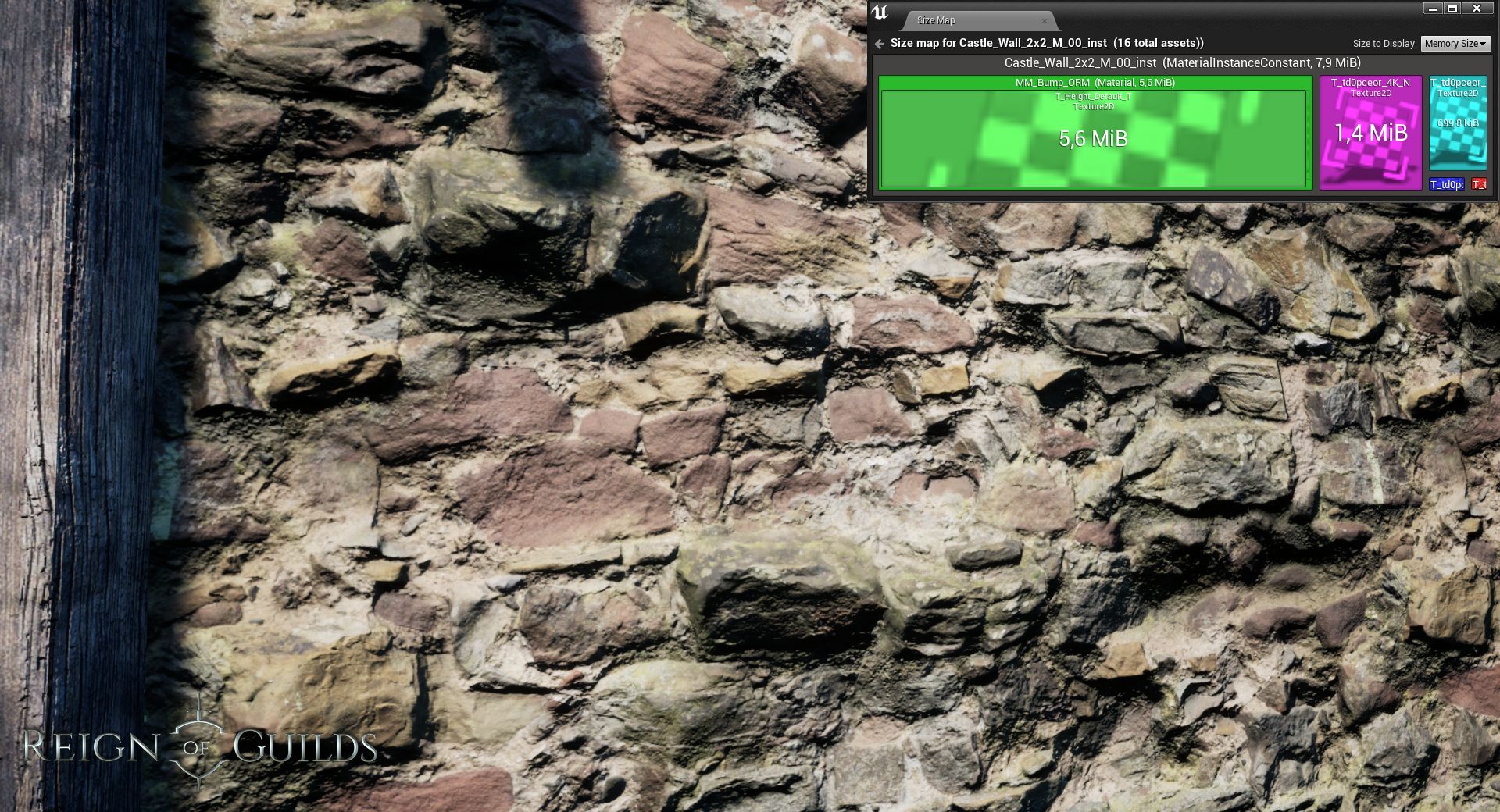 As you can see, the difference between 4 and 2k is almost imperceptible, 1k already loses in detail, but still remains stronger than the previous 2k textures.

Our old models shine with new colors with a higher number of new textures. 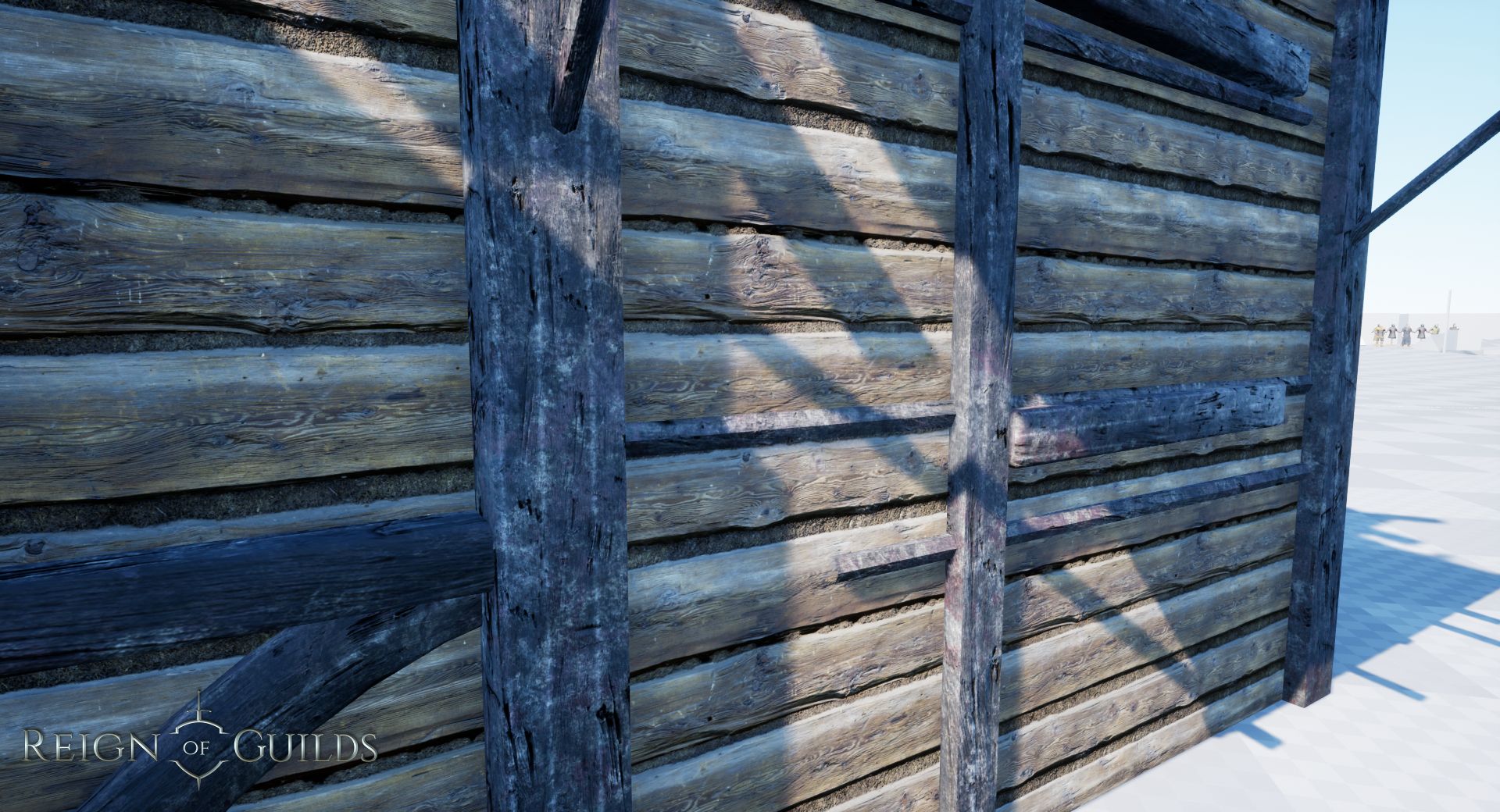 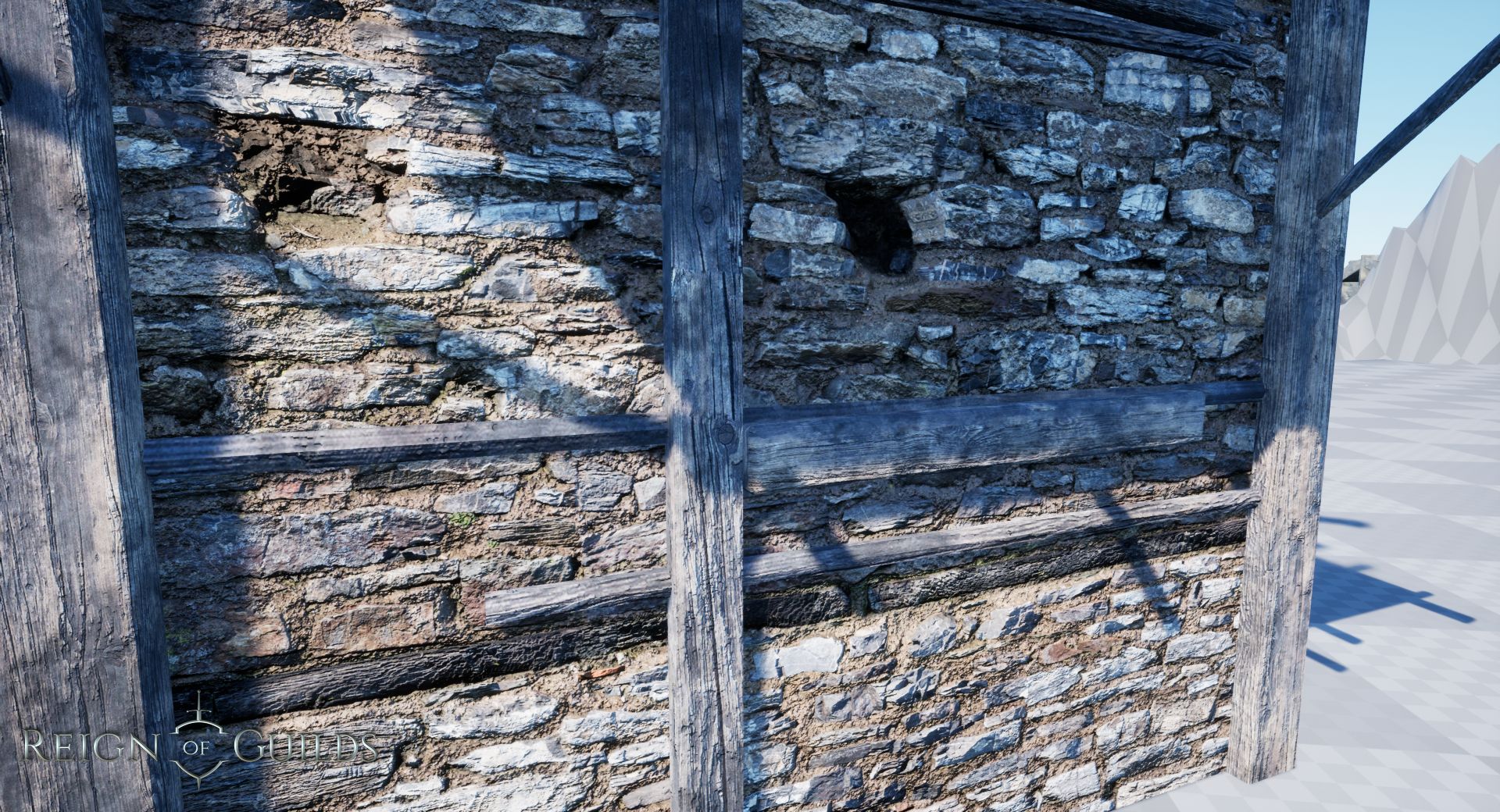 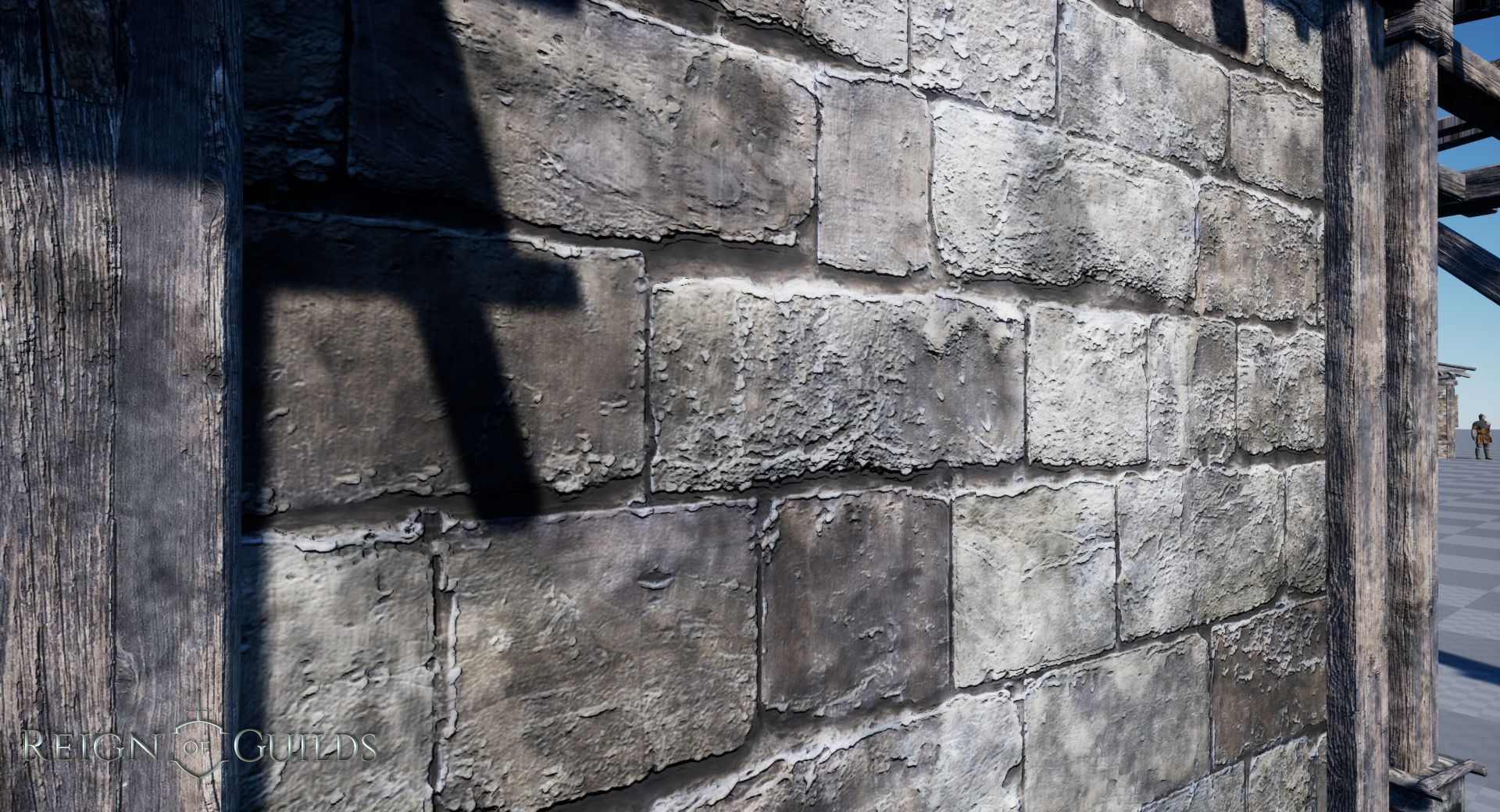 With the new materials for roofing, we get such houses: 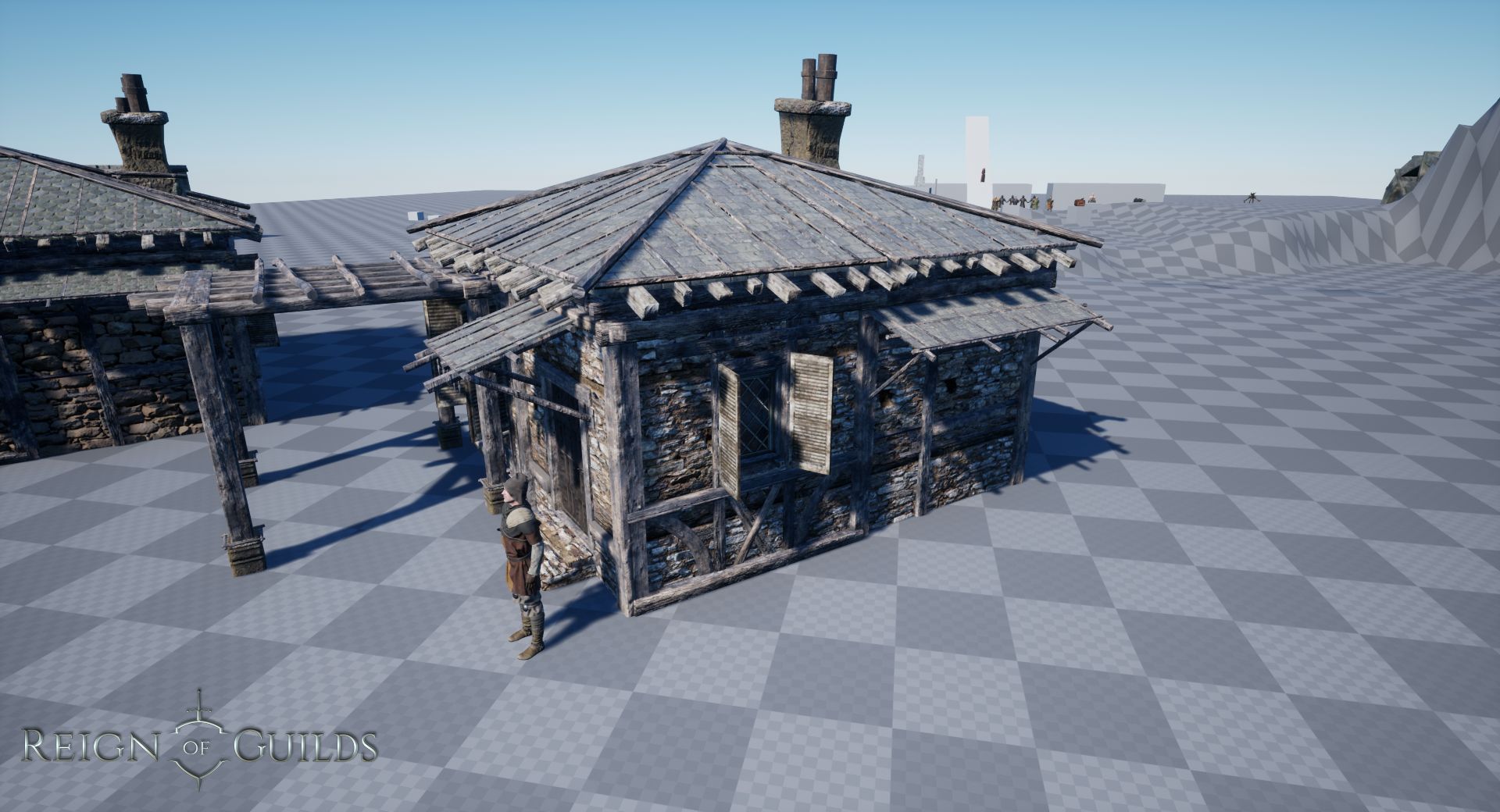 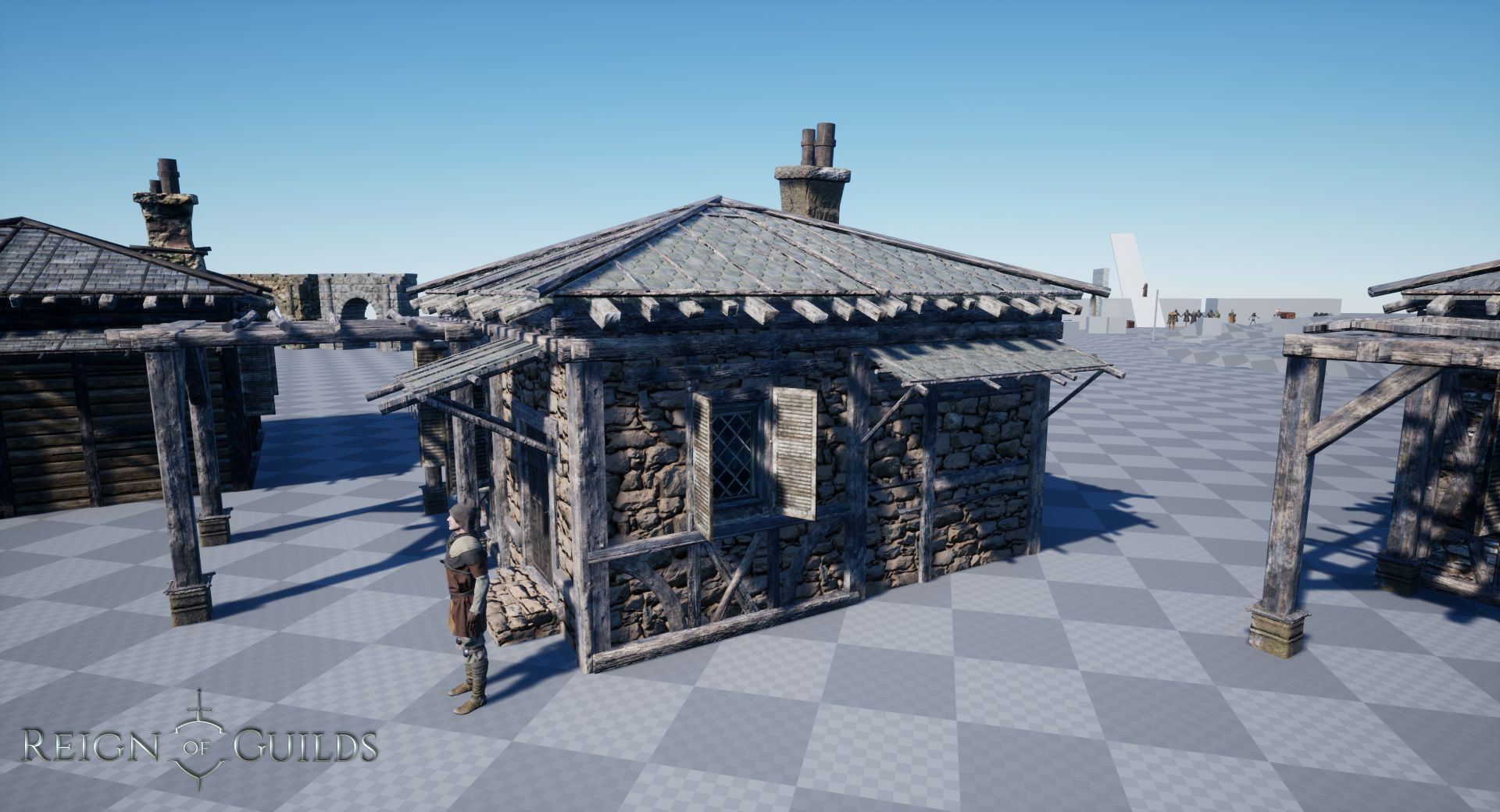 Naturally, it’s applicable to all objects of the surroundings: 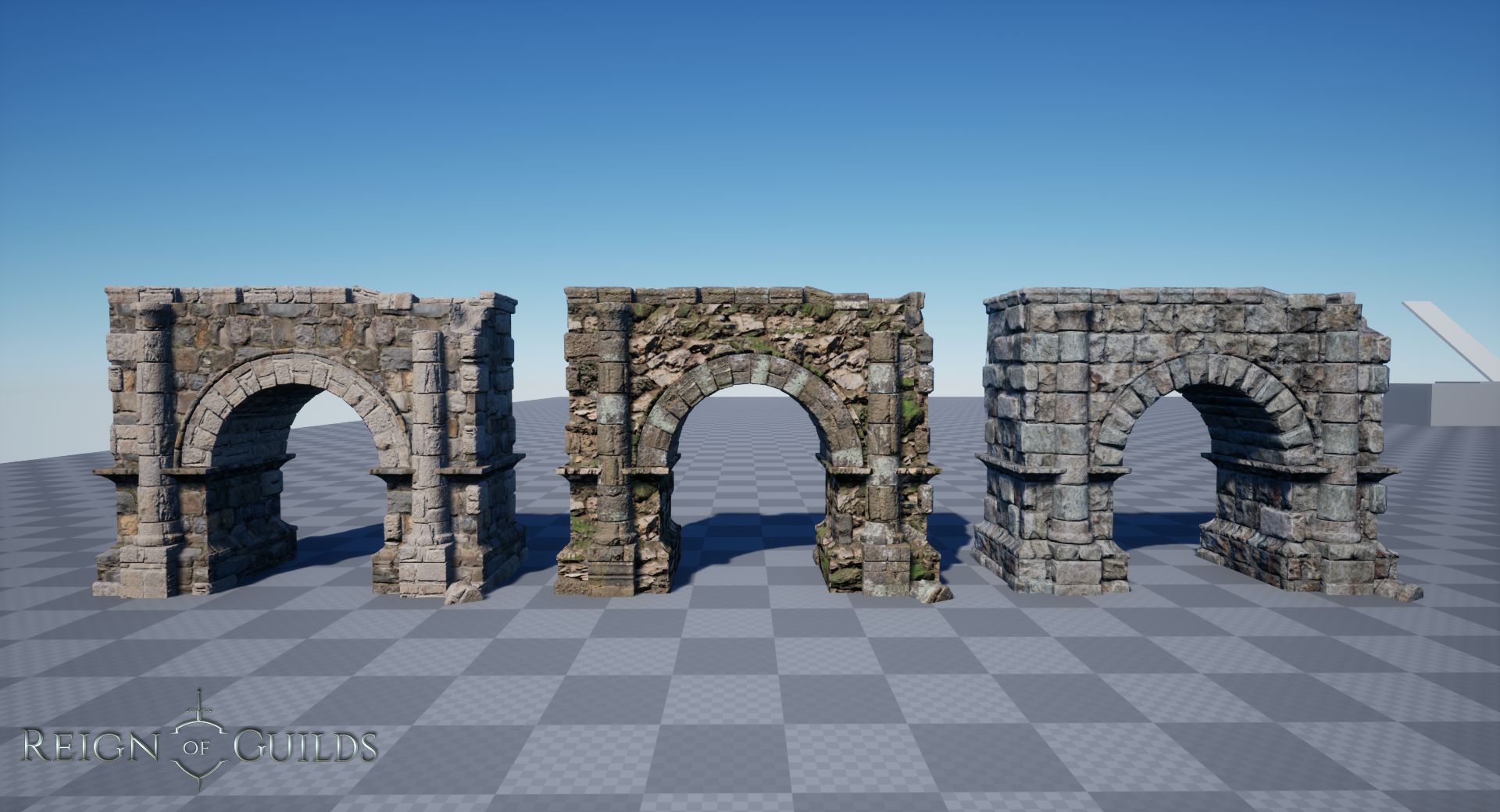 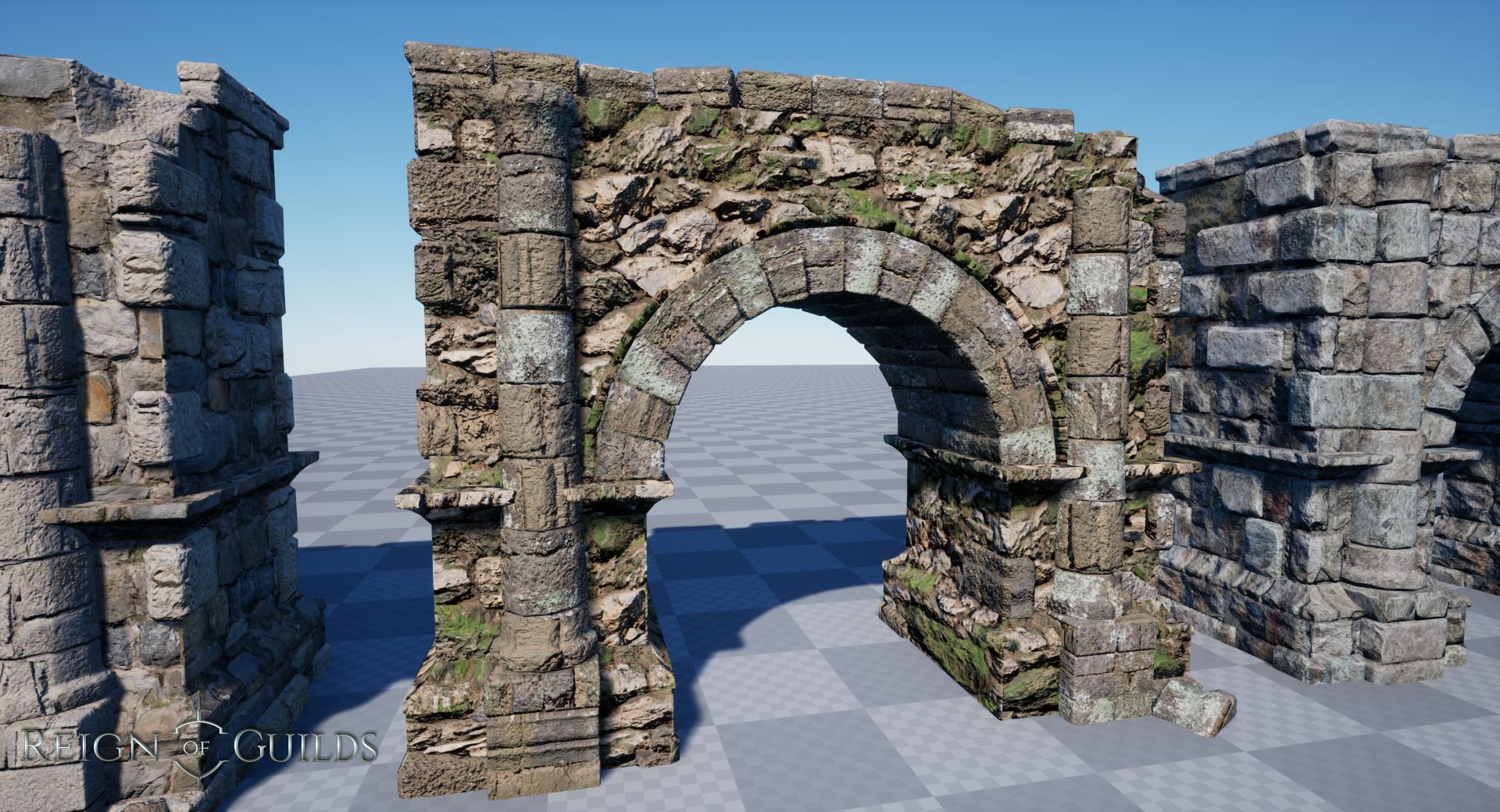 The number of problems that we encountered when trying to implement TrueSky kills the desire to work with it in many already at early stages.

We had already stopped with the implementation and waited for a long-promised solution by Epic Games or a bug-fix to solve many problems of TrueSky. The main issue is the crashes on several combinations of drivers, video cards, and operational systems.

The former got their own 3D clouds performing much faster. 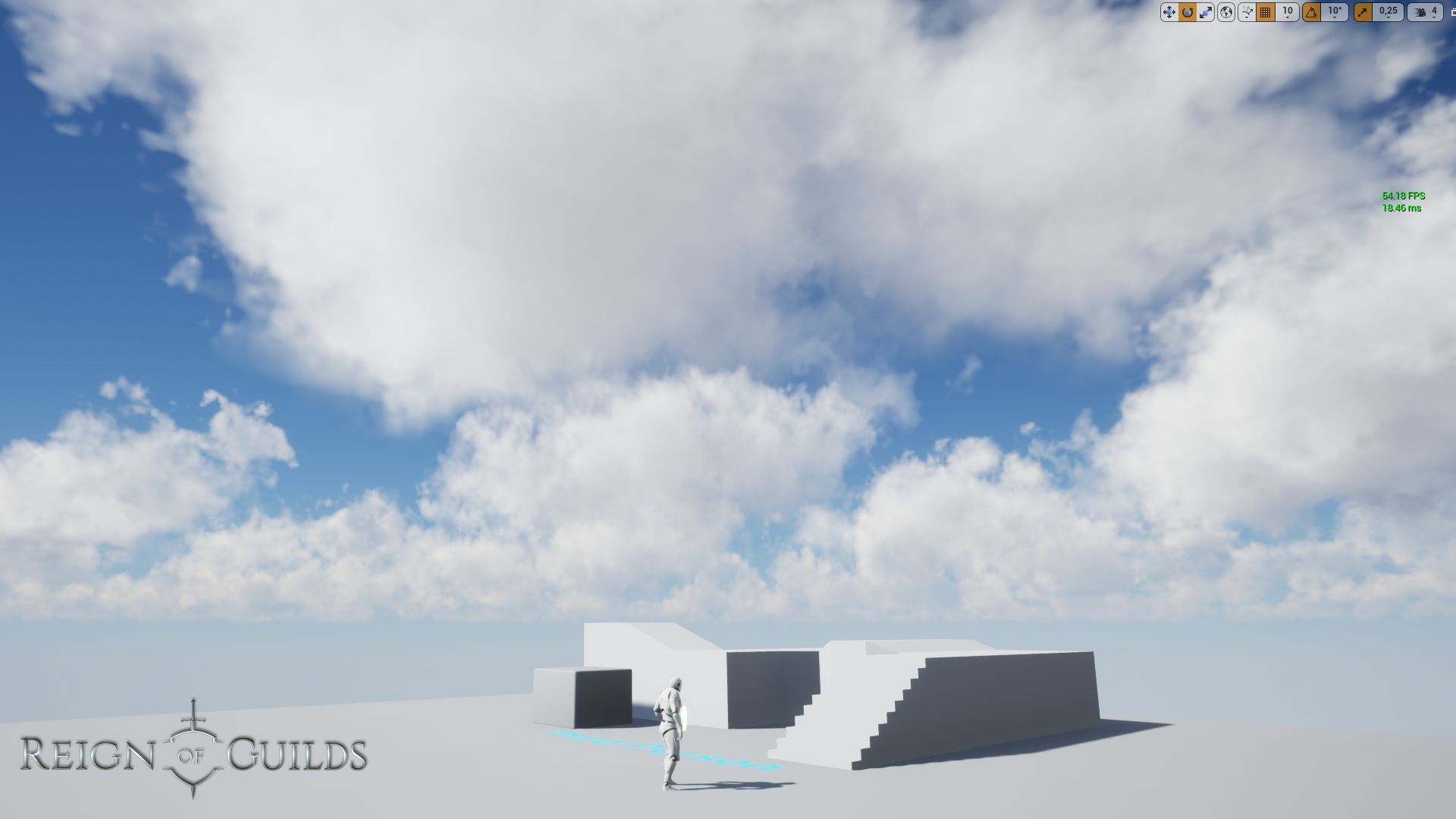 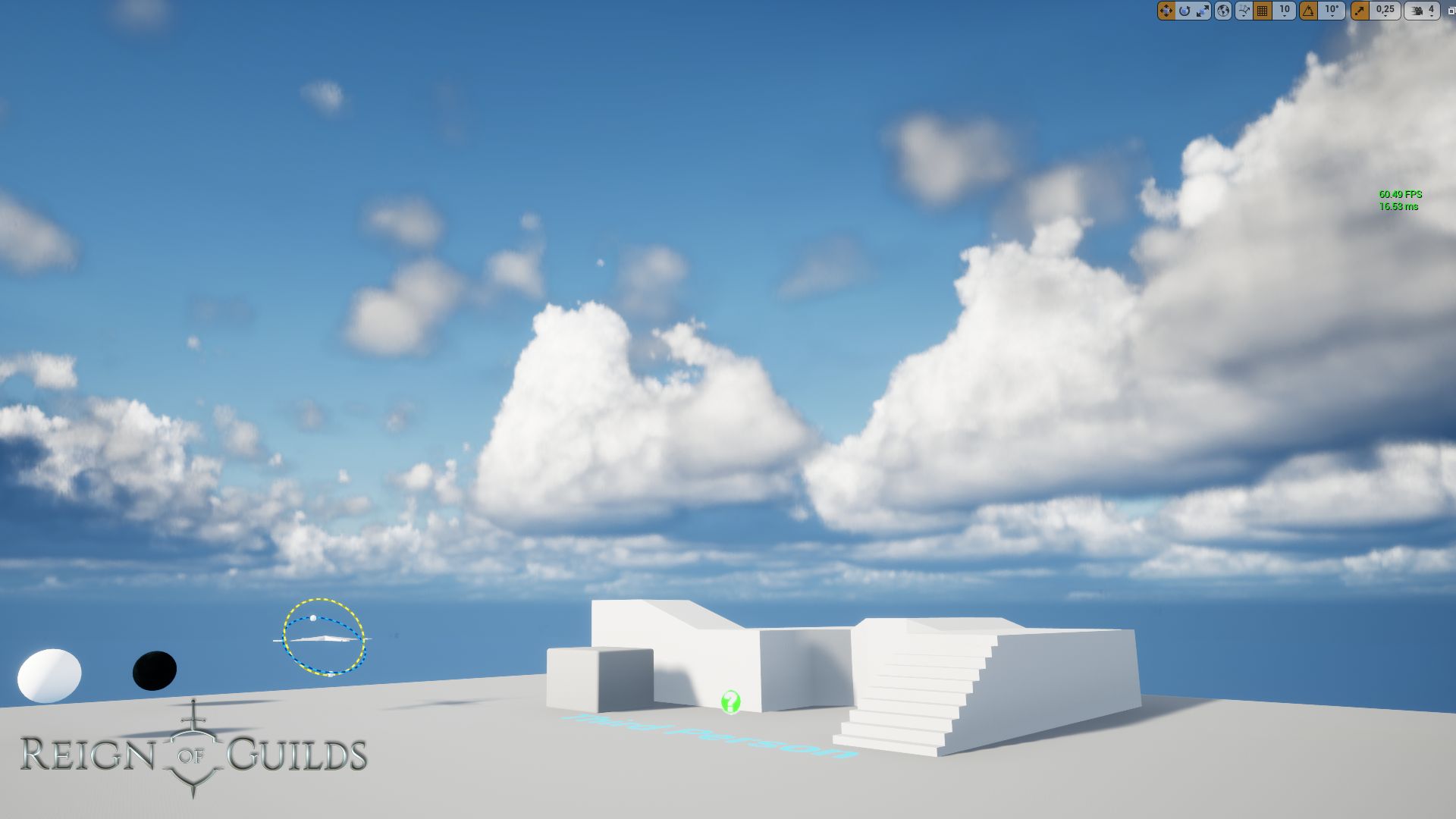 We are working with an experimental version that will be released in Unreal Engine 4.26. Already now we got a lighter solution that yields full-fledged 3D clouds but with fewer number of problems.

The only thing that we must redo from zero is the calendar of space bodies movements so that, as it was previously, the time of the year would influence the number of sunny days, the duration of the day light and night time. But all these will be in the far future, while the first part will be an abridged version

Experienced sorrows with TrueSky, Dimitry, who gave it the best half a year of his life :), decided to create a product that will be of the same functionality at least but it will work stable and without whistles and bells..

To sum it all up, we have shared news and plans with you and told you about the content that we managed to complete during the restructuring.

We completely understand your warriors and fading trust in the project, but we hope that you understood well the reasons for us being silent and you won't stop following the project. Besides, the hardest season for the studio is already in the past.

We would like to calm down and reassure everyone who applied for the pre-order and is worried about his or her payments: the refund was and is still available, the money is untouched and kept at the ‘payment provider’, Xsolla.

We hope that it's been all well with you and your close ones, that everybody are alive and healthy, and the pandemic didn't bring sorrows into your families.