Decent and strong economy system is a gist of every MMO. This also goes to PvP-oriented MMOs in general and to ROG in particular as nobody will conquer castles if income cannot be spent.  And if territories don’t bring income, there is no point to claim them!

So, basically, we had following tasks to resolve upon creation of economy system:

Inflation. To put it simply - inflation is devaluation of money supply. It depends on different factors including devaluation and decreasing of server’s population (which ease gaining funds).

Concentration of funds in hands of definite players. Gaining of funds in solo isn’t bad. However, as in real life, the system must encourage getting wages in cooperation. For instance, in real life merchant that trades with one single recipe cannot allow to claim county, right?  Merchant and traders should act as supportive economy force, but not the only single force in the market.

Trading with NPC as basis of economy. Yeah, we all saw this in lots of MMOs. 80% of players usually ignore auctions and feel fine. However this also leads to poor economy.

Having this difficulties in our desk, we took our game-designer and started to construct economy system for ROG: 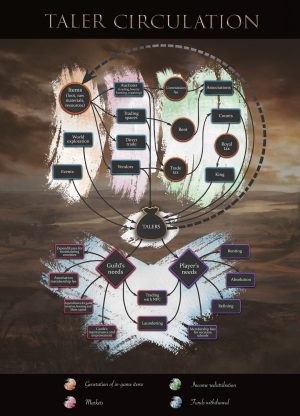 Top part of scheme shows creation and rotation of Taler and bottom one depicts withdrawal of Taler out of the game.

Top part is divided into subject topics, while bottom part - into guild and individual.

So, let us look closer into the scheme:

We call it “Creation of funds in the system” or “Emission”.

Items. Of course, you remember, that ROG is a game with “unattached loot”. It means that any item can be sold to NPC (a.k.a. converted into in-game funds).

World exploration. World of ROG is huge. It would be fair to encourage players to explore it. Right now we are working on ideas on how to implement this system.

In-game events. We do believe that money is best way to motivate players. That also includes events.

Of course, the most part of in-game money will be generated by trading with NPC.

This one can be called as market - depicts conversion of items into currency. All markets are to increase amount of currency in circulation.

Auctions. There will be 3 kind of auctions in the game: auctions for trading, bounty hunting and repairing. Auctions not only convert items into currency but also redirect funds - those players who use auctions pay commission fee (amount of fee is set by count) and additional commission that is set by supreme guild within relative association.

Trading space. Those are definite places in cities where players can put NPC for trading. In this case trader pays rent set by association of merchants. However, deals made via trade booths are not obliged with tax or fee.

Direct trade. The most profitable and hard way of trading. Players usually use chat/forum or trading window to make deals with other players. This way of making business not obliged with any tax or fee.

Trading with vendors. This is one of most casual way of trading (for the first time at least). Obliged with commission fee set by count. Moreover - at the moment we think how to make trading with vendors not too profitable to keep players motivated to interact with guilds and other players directly.

We call this block “Income redistribution”.

Associations. Merchant association gets income from the commission gained by other players upon trading. Crafters and mercenaries associations get income from repair auctions and bounty hunter’s auctions relatively.

Rotation between players: motivation, redistribution and our view on RMT.

Trading with vendors leads to increase of currency level in game. Currency circulation is eternal process. Decent part of this is forced distribution via taxes and commissions.

Unattached loot system is another way to control Circulation of currency and items between players which stimulates increase of trading volume. And high trading volume means bigger income from taxes and commission. You got it, right? Exactly - we doing our best to make count’s/king’s position more profitable! Yes, no doubt that this system also invocates Real Money Trading (RMT). We can prove and argue that RMT is pure evil but….We’ve made a decision that we don’t want to bind trading volume and limit players in their ways of making business in our game as this won’t avouch that RMT might not happen. Those restrictions might also lead to critical decrease of trading volume or even “kill” our mechanics that are to redistribute income (with help of taxes and fees). Do we believe our methods are right? Only time can tell.

Our refuse to accept bonds is first step of resolving one of main tasks - Domination of NPC trade. We will continue to keep you updated about our way of resolving those tasks (those steps are more complicated and include lots of mechanics that are not connected with currency) in future blogs.

So, let’s return to the biggest problem of virtual worlds - inflation and point out how we are planning to withdraw funds from currency circulation. This goes to the bottom part of our table which divided into guild and player’s needs.

Beyond that, there are needs both for guilds and players like: trading with NPC -- consumables, food, powders and guild consumables for GvG. Besides -- legalization of income gained by criminal methods. It means that if someone stole something (from caravan, for instance)  he should pay...or he won’t be able to add those funds to his bank account.

So we’ve described 10 methods of how we are planning to withdraw funds from currency Circulation and withdraw currency from the game. Now, all we need to do after implementing those mechanics is to adjust emission in order to prevent poverty. This is where we use our “dynamic vendor trading” (we’ll tell you more about this system in our next blog).

Concentration of funds in hands of definite players can be resolved with redistribution of income between counts and king. We already created some ways to protect players from Total monopoly but we will also tell you more about it in next news and blogs.

Join discussions over taler and its role in ROG in relevant theme on our forum.