We would like to tell you a little bit about an important component of the world mood of Reign of Guilds - light. And of course, you know that the mood and atmosphere could be conveyed directly through the light and its positioning. The ‘horror’ genre, for example, is hardly visible dark and dimly lit corridors that make you gaze into the darkness with the thrill of waiting for uncharted creatures around the corner. Conversely, ‘arcade’ genre for the whole family, where the colours of characters and environment should be intensive and bright.

The Reign of Guilds world is the world of the troubles, constant wars, tricky and thought-out trade. This is the world in which not only the strongest commander or duelist survive, but also calculating ruler who could trade wisely, surrounding himself with loyal friends and allies. It should not be forgotten that events are taking place in different climate zones which we have described earlier in the development blog.

And now it’s time to share with our vision of the lighting in the Reign of Guilds.

Before we get to work on lighting we’ve been looking for inspiration in real landscapes of different countries. And also we looked through the implemented decisions of top game studios. Influenced by global trends in AAA game development, we still try to bring something unique.

Southern climate has hot blazing sun that lights up everything from densely populated forests to high impassable mountains. There are warm evenings with marvelous sunsets foretelling cool nightfall with blanket of mists rising out of the heated ground. And sunrises claim the dawn of a new day in the Reign of Guilds world. 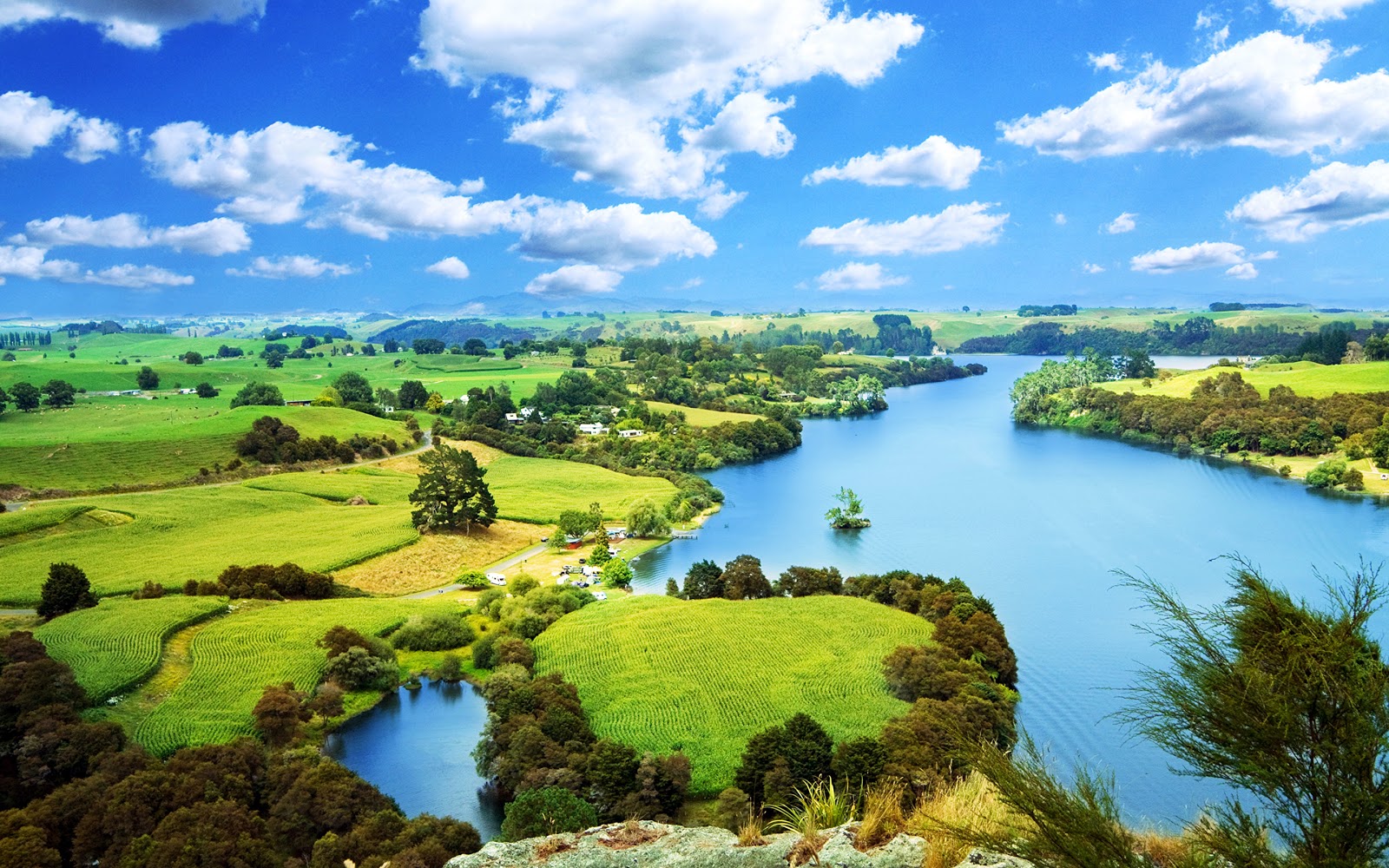 Mild climate is very similar to southern, but the light is not so intensive. Lighting is more balanced with a smooth transition of day cycle, but still it pleases with green landscapes as exciting as sunsets and sunrises. 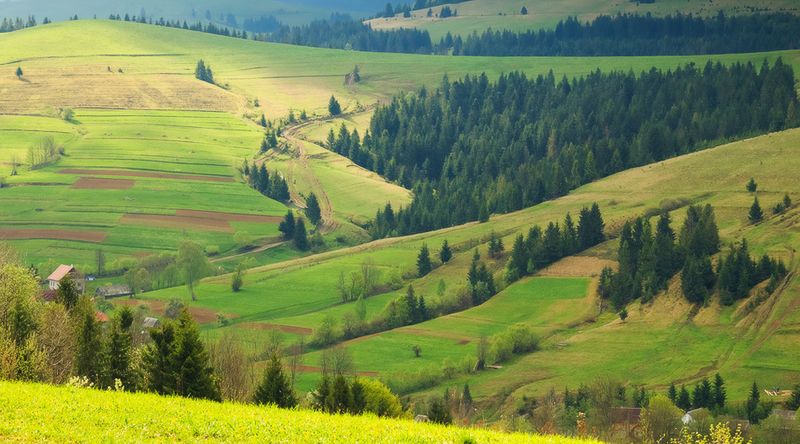 Carpathian Mountains  (inspiration for the Mild area in RoG)

Anear North Climate  is completely different from bright landscapes of the above areas. The autumn mood runs the show. There are swamps, bogs, gloomy rains. Sometimes you can see a beam of light through the heavy clouds. This makes the global picture more grunge, creates the contrast and diversity of the Reign of Guilds world. 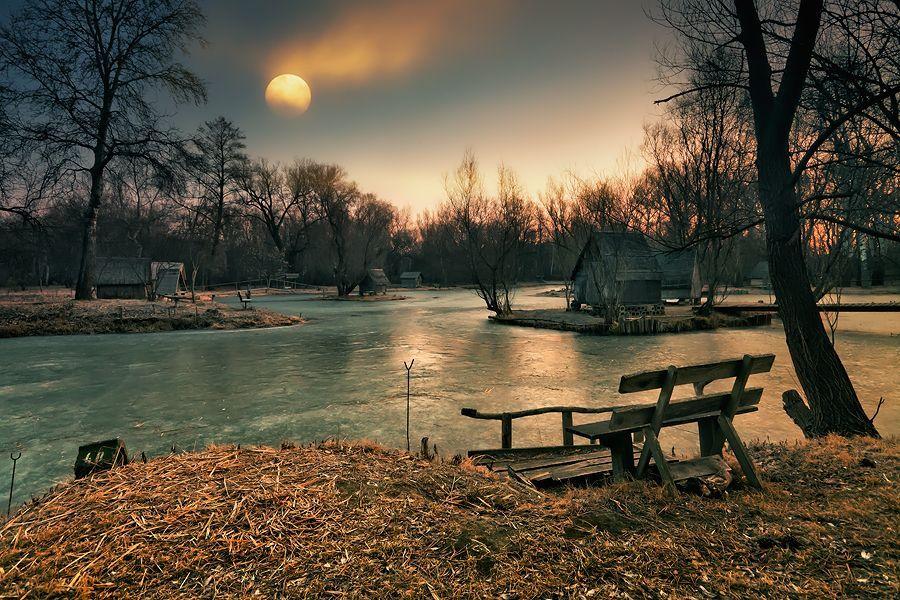 Northern Climate has boundless snowy fields and mountains. Cold colours fill the whole northern territory. It is lit up with the cold sun that is shining but doesn’t heat. The ground, covered by permafrost with diamond sparkles of the frost on the snow and frightening with severe wind, offers us truly wild and magnificent landscapes.

Mount Elbrus, Kabardino-Balkaria (inspiration for the Northern area in RoG)

Let’s remind that we are not going to replicate this landscapes. We use it as a great example of palette with the variety of colours inherent in this countries or areas.

Studying of landscapes and hard work of our designers on the lighting in the RoG world offer us a visual representation of each area and help to emphasize the mood of all areas.

Due to the powerful Unreal Engine 4 (UE4) and experience we can afford ambitious targets for lighting. It isn’t enough to mention that in the game there is the night and day sequence in real time. We created the algorithm for every time of day: the morning mist is replaced by bright daylight, turning to the noon heat, followed by slow fading away of sunset and serene night of sleepless cities and settlements. Moreover, we created LUT-textures for each biome to make the light and colour palette more pleasant, which are also colour correction.

The entire day and light system operates as a single “Blueprints” (Blueprints is the system of visual scripting Unreal Engine 4). We use main light components which we’ve altered and modified. The whole time scale for the day was created through main function UE4 - “Timeline”, which is cycled and works for the sun movement. Also all settings were created for the further manual override in the editor:

Now “Blueprints” has functions for the code optimization and simplification of the work, but we had a larger target. For instance, we had to provide the whole system for the editor with which we could change the time of the day in real time and enter any value - whether it was 2 a. m. or 7 p.m. In the UE4 1 game hour was equivalent to 300 reference frame, after time conversion 2 real hours became 24 game hours. We will tell you more about this and other mechanics in our future development blogs.

We used to face difficulties with the technical questions and with the whole visual background fitting into the overall picture. Firstly, we faced the visibility range and visibility in general. We want not only to create a pleasant picture filled with the light, but to give life to it, using mist as well as road dust effect, flower pollen and much more. The thing to keep in mind is that we deal with MMORPG where we should maintain a balance between beauty and visibility to see the enemies in time or to find a valuable resource. 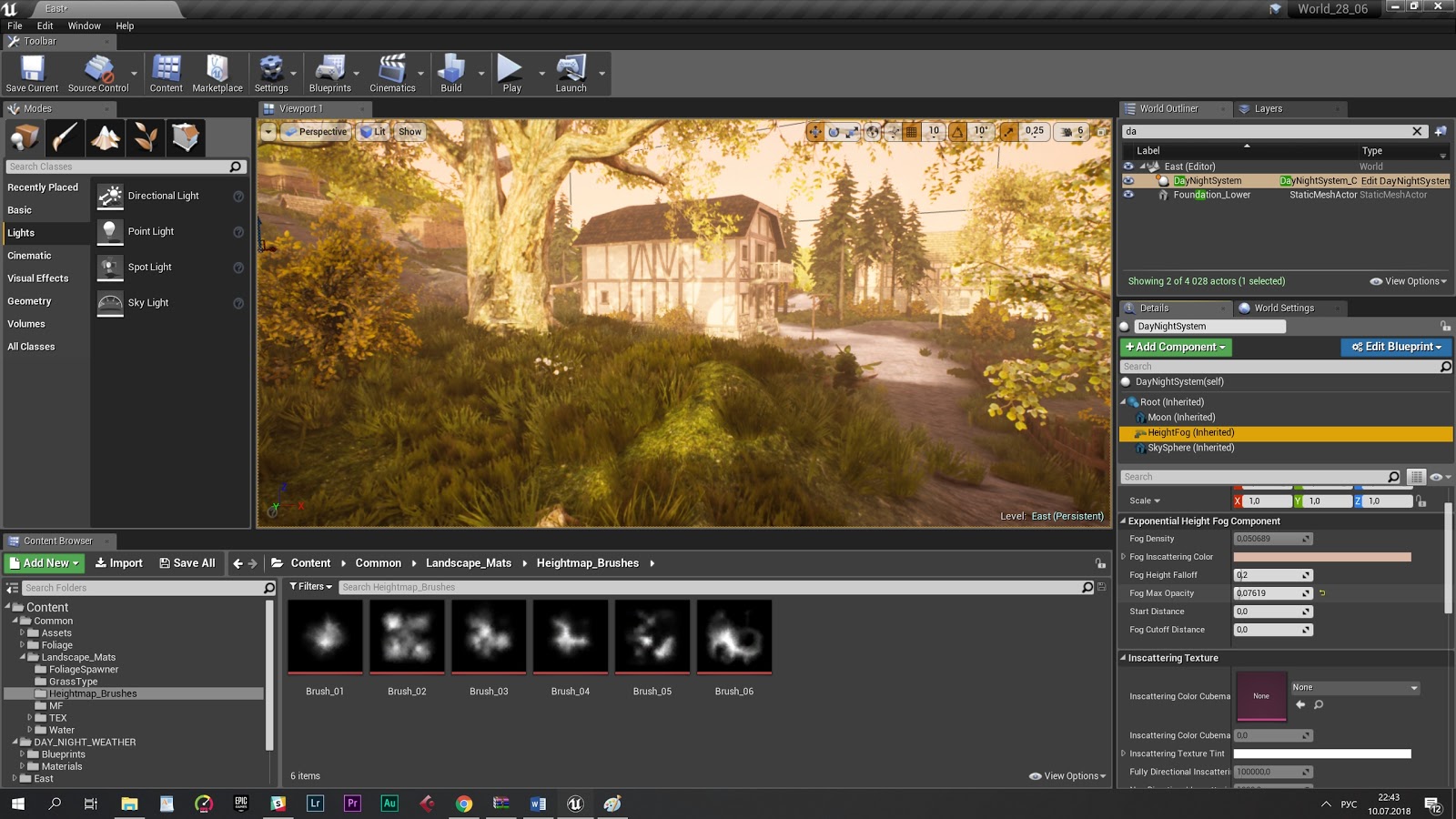 First draft of the daylight 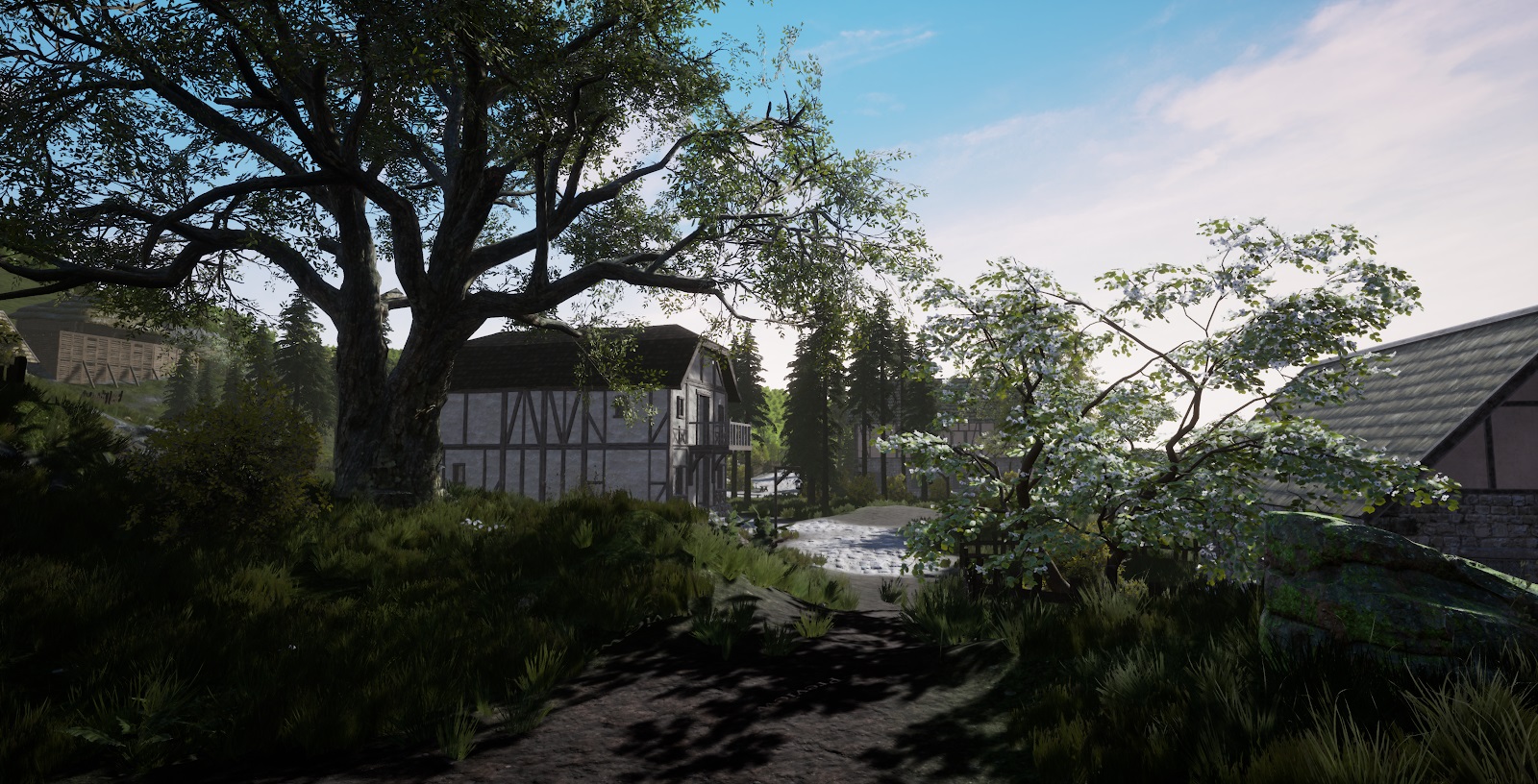 After we determined part of the daylight effects, the most difficult night light was still to be performed. For MMO that’s a different story, because you need not only to show the greatness of the night and her dark mysteries but to show a path for the gamer. He shouldn’t get lost in sleeping forest thickets and swamps, wandering in the dark. But moon has been by our side with her magic moonshine, pointing a way and allowing to see the aim in the thick forest! Night would be further developed but we want to share with first results on this direction:

But we shouldn’t forget about sunrises and sunsets of Reign of Guilds world that are under development now. We can show a few prototypes: 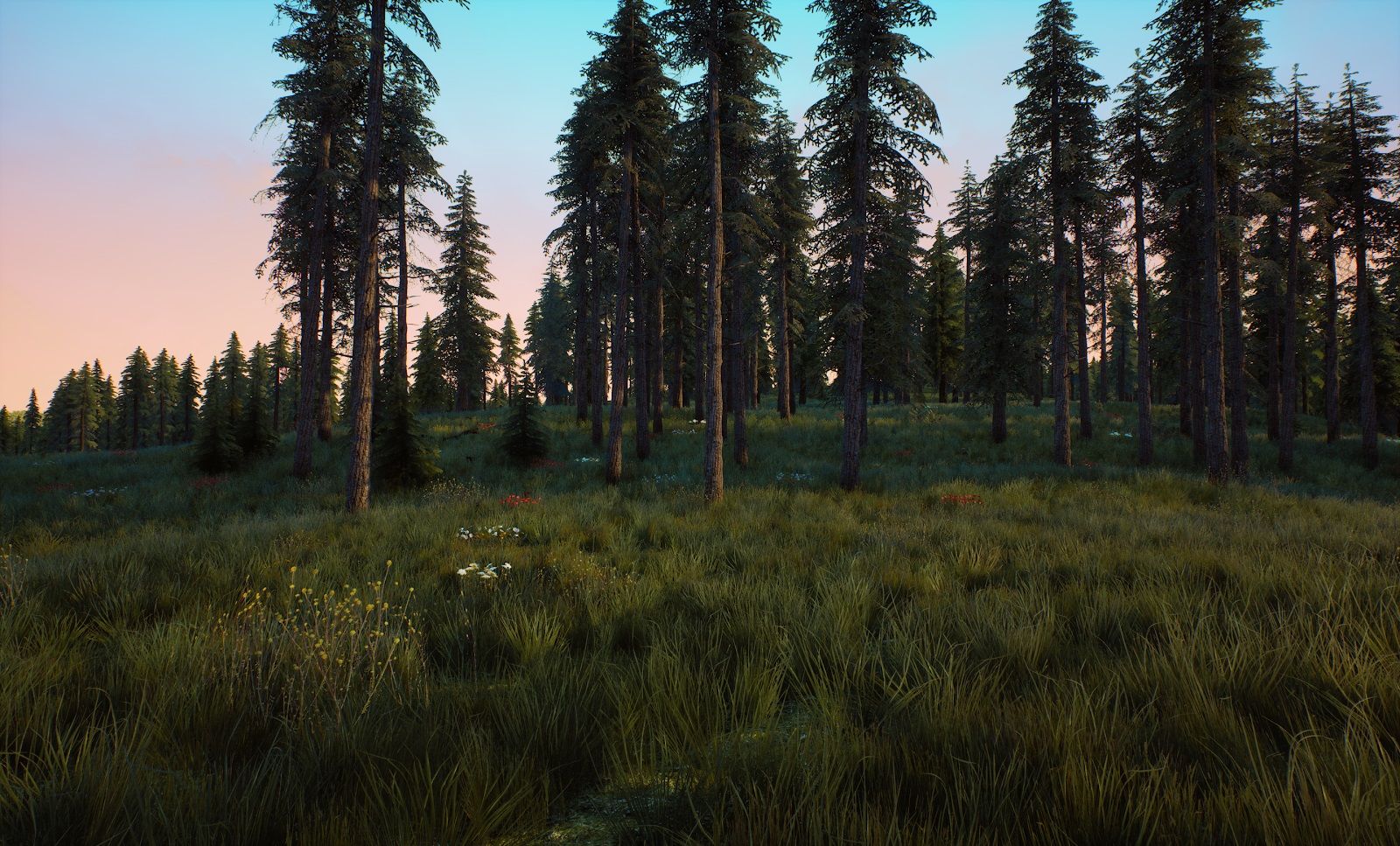 Little piece of a new day 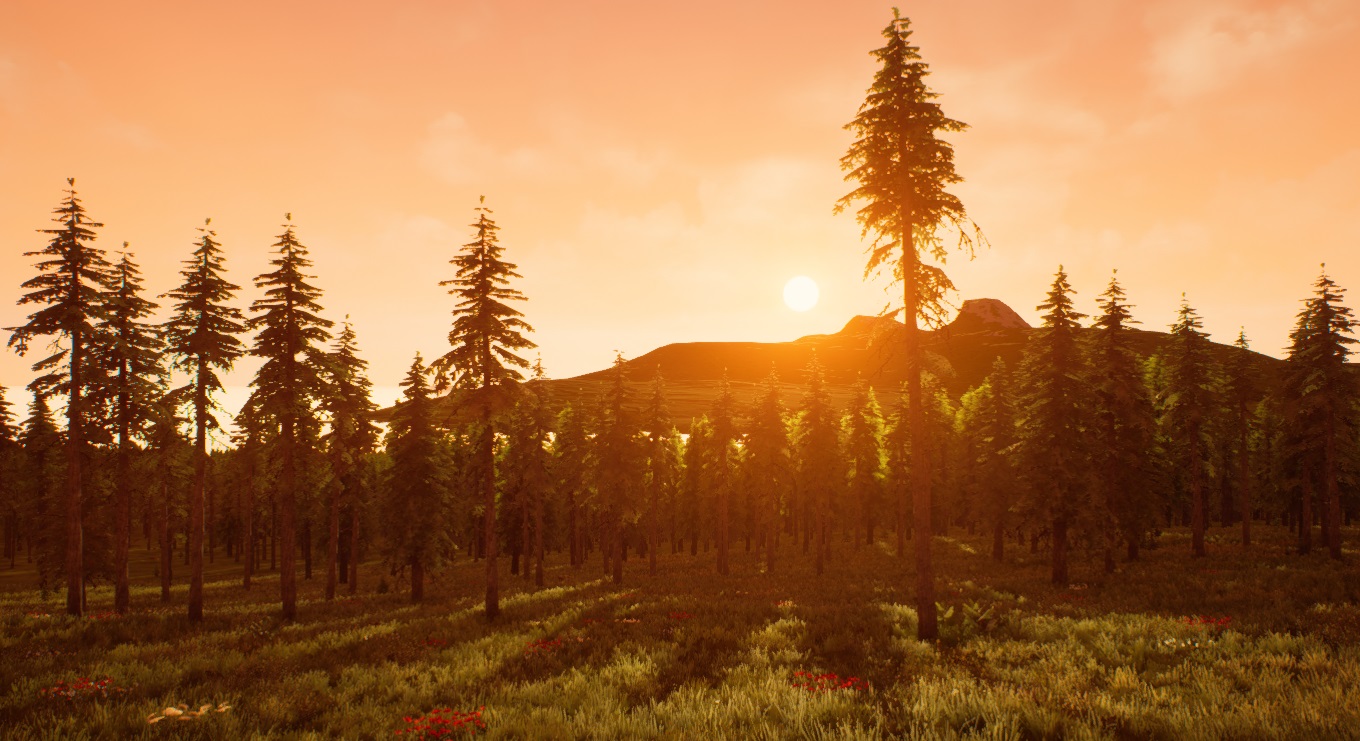 Approaching of a night (test prototype)

This altogether won’t let you get bored on the boundless space of the four climate areas. You can try it shortly, making an application to take part in our alpha test on the website.

Will keep you updated!